Every Indian, no matter whatever is his mathematical prowess or his profession knows about a certain gentleman born in 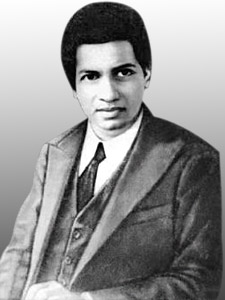 Erode, Tamil Nadu on 22nd December 1887 – S. Ramanujan. The modern Indian tradition in mathematics got a jolting shift with the advent of the sheer genius of Ramanujan. No man ever had achieved what he achieved in his 32 years on the earth and no other mathematician is likely ever to achieve such exalting fame and recognition living for such a short span of time.

Born in a very poor Tamil family, his father worked in a cloth merchant’s shop and his mother who had a huge impact upon his childhood was a simple housewife. Making both ends meet, they somehow managed to scrape through. Ramanujan had tenacity for mathematics that could only be called haunting even at a very young age. He read books meant for college students and excelled at them, even furthering the results given there on his own. It came as no surprise when he passed his matriculation with flying colours. Ramanujan entered the Govt. College of Kumbakonam and then tragedy struck-almost.

The greatest misfortune for geniuses like Ramanujan is that they are very often so far ahead of their times that it takes mere mortals years to catch up with them, At college Ramanujan neglected every other subject apart from Mathematics and failed in all of them miserably. A genius like him could not even muster up an F.A. degree. He dropped out of college, all the while doing his mathematics and showing it to people who he hoped would understand its value. But alas, India didn’t have a mind as great as his to recognise what they had been blessed with. Fortunately, there were enough good willing gentlemen in the then Madras, who helped Ramanujan with a job and enough spare time to do his mathematics.

In the meantime, his mother married him to an eleven year old, Janaki. With the added burden of a new wife, Ramanujan searched for a job and finally got one at the Madras Port Trust office as a clerk; a position which in no way reflected his true potential. Undeterred he continued on his sway over modern mathematics and derived a plethora of results for himself. At the suggestion of various people he decided to send his work to a few famous English mathematicians. The first three mathematicians whom he sent a letter didn’t even bother to reply. At last one professor replied but with not enough enthusiasm. And then, Ramanujan wrote out a long letter to Prof. G.H. Hardy, a young British pure mathematician. The rest as they say is now mathematical folklore.

This letter is perhaps the most significant piece of mathematical importance for the modern world. It contained lots of results which were new, a few of the results mentioned there were false and a whole lot of them had already been derived by great mathematicians of the 18th and 19th century. Hardy at first dismissed the letter as that of a crank, but then something was bothering him, and he along with his frequent collaborator John E. Littlewood sat out to marvel at the content of the letter. Just a few minutes on, they knew that they had a genius at hand, perhaps a “second Newton”. Hardy later said that the formulas mentioned in the letter must be true because if they weren’t “then no one would have had the imagination to invent them.”

Hardy made fast arrangements to have Ramanujan come over to him at Cambridge University and he left no stone unturned to achieve this. At first Ramanujan was apprehensive about going abroad, being a devout Hindu Brahmin, he was not allowed to cross the seas. Fortunately for mathematics, Ramanujan relented and he set sail. Upon arriving at Cambridge both Hardy and Littlewood spared little time in polishing the genius of Ramanujan, and they formed a collaboration which has no parallel to this day in any field of human creativity.

However, Ramanujan’s health faltered and he was hospitalized on many occasions and finally he left for home again in 1919, after spending about half a decade in England and producing some of the most magical mathematics that the world has ever seen. During his stay at Cambridge Ramanujan got a B.A by research degree from Cambridge University and perhaps remains the only man to get such a degree without an F.A. He was subsequently elected as a fellow of Trinity College, the first Indian to get that honour and then became the second Indian after Sir Ardaseer Cursetji to be elected to the Royal Society, the highest honour then for any mathematician to get. Ironically his candidature to the Society was vouched for by two of the mathematicians who had earlier not replied to his letters. Ramanujan was nursed in India by his wife, but fate had other plans and so, on 26th April, 1920 he breathed his last at a house in Madras. The world had lost a brilliant man and mathematicians all over the world who were just beginning to appreciate his mathematics felt a terrible loss.

Ramanujan was a remarkable man in many aspects. He was a man completely self taught and without any formal University Degree. He was a man whose genius till date is unparallel. No one has even come closer to following his legacy. After him, India has produced numerous mathematicians of the highest order, but none can ever eclipse him. Even after 90 years of his death, mathematicians all over the world are still researching over his ideas that he noted down in two very famous black notebooks. Prof. Bruce Berndt has devoted almost 25 years to the polishing of the results in his notebooks and published it as a five volume series. Ramanujan’s mathematics finds applications in almost all branches of mathematics and even in fields so far removed like cancer research, string theory and crystallography, etc.

Ramanujan has inspired a biography by Robert Kanigal called The Man Who Knew Infinity and a historical fiction by David Leavitt called The Indian Clerk. Plays based on his life have been staged on Broadway and a movie on his life is planned. There are numerous awards in his name, and the whole world celebrates his birthday as Ramanujan Day. Ramanujan also enjoys a unique stature among mathematicians as the only one after whom a fully fledged international mathematical journal of repute, “The Ramanujan Journal” has been named. It would come as a surprise to many that a very popular pop song called “Ramanujan” has also been released. Popular Hollywood movies mention his name with respect when they want to compare the genius of any mathematical character. TIME named him as one of the most influential men of the 20th century. Even today researchers all over the world still marvel, how he did what he did? Dozens of mathematical papers devoted to his mathematics appear month after month.

Perhaps it’s just fitting to say that the words Einstein used for Mahatma Gandhi would apply to Ramanujan too: “Generations to come and generations to go, will scarcely believe that such a one as he, had walked upon this earth in flesh and blood.”

Author’s Note: Due to the overwhelming aspect of Ramanujan’s mathematics, nothing mathematical has been described here as FE is not the ideal medium for that. However, the author’s favourite Ramanujan formula is given as a picture along with the article. The author would like to dedicate this article to Prof. Bruce C. Berndt for doing a great service to the entire mathematical community by taking up the job of editing Ramanujan’s notebooks and for inspiring the author through his numerous emails and letters. The author also happens to be a first class fan of Ramanujan and hopes someday to add some meaning to more of his maths!