I am his daughter‚ those pictures on my walls‚ the name‚ the soldier in his uniform.

I live in Pune‚ work as a Soft Skills Trainer (freelancer) picking up small assignments to provide for my 8 year old daughter. It is not easy being a single mother‚ providing not only financial but also physical and emotional support to my baby single handedly. Her father‚ my ex-husband does not contribute one dime towards her upkeep.

It is very difficult and tiring‚ especially without the love and emotional support of a loving family. Imagine, it is just me- my daughter and my father’s pictures on my walls and in my wallet, bearing the cross of a forgotten statistics of this nation- my father!

In the dead of night‚ plagued by chronic insomnia I talk to him‚ this soldier lost in time; my father unknown!

Where are you‚ I ask him‚ can you not hear me weep? How can you? You are a picture a name a rank. They say the walls of your prison are so thick that the sound of my crying does not reach you. It is said to be so damp that my tears get lost.

Would my life have been different‚ Baba‚ if you had not been taken away? Better perhaps? More worth living? Did I just call you baba? What would I have called you? Baba‚ Bapi, Daddy or Papa?

What would you call me? Granny used to say that you always called me “ma”. What did your voice sound like? Your smell, the feel of your touch? I bring my face close to your photograph and try to feel you. I smell old paper and wooden frame.

I do not understand wars‚ cannot fathom the workings of political minds. I am a mother; I understand love and peace. Whose war was it anyway? Not mine! I don’t think it was yours either.

Who is he mom’‚ my little one questions me.

Your father? Where is he? What does he do? How come I never met him? She bombards me with a thousand difficult questions and I have no answers. She senses my pain and turmoil and looks worried. I change the topic and distract her with Barbie dolls; for now. But for how long? How do I answer her? What do I tell her? 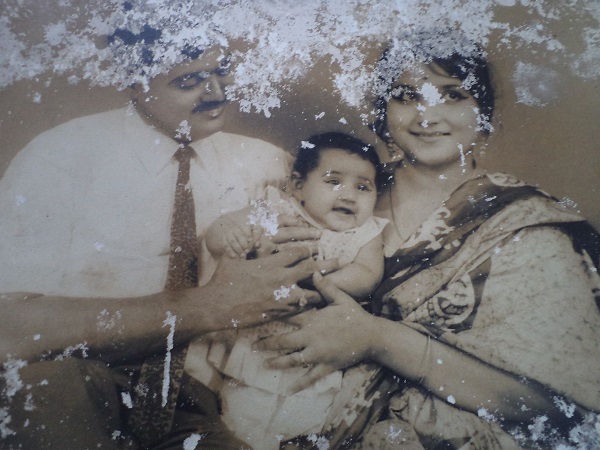 Did you know that her father’s pet name was Kanchan?

Many a times we see people at cross purposes and we wonder, will they live up to their destiny? Some decisions, some choices need great courage, great conviction and an immeasurable amount of hope. There are many such stories of conflict and courage, there are many stories out there of hope in a hopeless situation, of human endurance, inspiration, injustice- incredible stories that shocks, stirs and finally move you into action. You find a purpose. You realize the purpose of being human.

The other day while going through many articles and notes coursing through the cyber world, we came upon per chance a note- Prisoner of hope – in FB which made us sit up and take note. The write up was sheer brilliance undoubtedly and an example of fine writing, but it was the story that had shaken all up into a raging discussion. There was a palpable restlessness among the readers. They wanted action. They needed action. They believed they Deserved an action soon. And that is when we came upon a name Nilanjana. We came upon her story. Who is Nilanjana? What is her story? Who is Nilanjana’s father?

15th August – Our independence day. 67 years back we had won our Independence on this day. 67 years hence, we still are independent in spite of two major wars with our neighbors. Who do we credit that too? You know it- our unsung heroes. But no, we don’t want you to sing paeans for them… A hero’s welcome? Yes that would be so very nice, but for that the heroes have to be back…Are all our heroes back home where they belong?

Some questions without answers…

For that we need to open the Pandora’s Box, through Kanchan Bhattacharya’s Facebook note- The Prisoner of hope, reproduced verbatim with due permission from the author.

Prisoner of No Hope

He is a prisoner since 1971. A prisoner of war, detained by a nation of betrayers, one that cries for its own, but returns nothing but terror…

Dreams in his eyes, would you believe he was a soldier, an officer, a gentleman, leading men. His gentle looks nevertheless never betrayed his determination. Back home he had a wife, with a child, eight months old in December 1971… I am sure, he wrote poetry. I wrote- I fought the same war. And he sang beautifully!

This was a dark night, a cold December. Trenches never stop the bitter cold.

The enemy came, surrounded the post, and after a fierce battle, ran over the post. A wounded major, still bleeding was dragged away and loaded into a cattle truck, destined for inland prisons.

They shifted the major from prison to prison, “losing” records of his imprisonment conveniently, never owning up. They starved him. Insanity took over. He dreamed no more, and he suffered more injuries.

Gradually they lost track of him. Rumors said he was seen in many different jails. Some fortunate prisoners who were let off, brought photographs of someone, a look alike, now bearded.

Letters never reached the powers that be. They shrugged away all appeals. Whom do we chase? Too much effort- after all a soldier may die an unknown death, no regrets. We paid you compensation- a pittance.

The land of jihad now intrudes.

Bangladesh was not enough lesson- we released a hundred thousand prisoners. They forgot their promises. This soldier never returned, like a thousand others, lost in the lopsided rules of justice in the subcontinent divided by a fence, the Western one- that stuck to its avowed principle, kafir, die.

She called me last night. I did not pick up the phone. May be she wanted to say something…

I dream on. In fact I had a nightmare… she may have died, a suicide, she had never seen her father. At 42, she cries, no siblings, none to love, just a child from an abandoned marriage, grandchild to the father who she never saw…

I wonder how and when would this soldier would be set free? May be he has freed himself… he may have died.

Saffron shades, green shades, olive green, canon feed, bullets fly, lovers die you hate me, I hate back. Into my land you enter, surprise, you kill, we face flack…

A politician across the border applies tourniquets, twisted logic, a matter of fact…

The nation that breeds mujahedeen lives off the cream we provide, firm in their animal moods, animal deeds, they have always believed in their own lies- there needs to be a call to upbraid them all, no more appeasement- send them where this lost father went into jails without justice, into those rooms without vents, food of maggots and flies, laden with the hoarse, hopeless cries

Forty two years. A man in his late twenties, now in his seventies, sanity gone, his long nails scratch and pick at the vermin on the soil, that wet prison floor. He perhaps has forgotten everything. Even himself…

He is the prisoner of 1971, frozen in time… and his daughter pines.

An aluminum tag, an epitaph

A typed note, so regretfully sent

He is dead/He is a prisoner, a life spent…

“N” was born in 1971, before the war… she was eight months old when her father was captured. One of the prisoners who was let off from Pakistani jails said that the prisoner who he thought was Major Ghosh, sang a song “Pardeshion se na ankhiyan milana”… his favorite…

We came upon her. We spoke to her. It was difficult, not because she was unapproachable, but because we were unsure how to approach. We felt ashamed, apologetic, unsure of what we could do. But speaking to her changed my perspective- in her determination we found our courage. And bit by bit the story unfolded…

“My only interest is getting dad back” her determination showing forth, angst smoothly hidden behind those few words.

Facing a difficult childhood, life hadn’t been easy for her, but that is a sad story for another day…

Even beginning the search for him wasn’t easy for her as she was unaware where to start. “I was also pregnant that time”

The search is on. Hope never abandoned, though the authorities might have abandoned her – “I don’t believe in a God that resides in temples. I believe that a daughter is a Goddess given to me by the universe to nurture and protect. From her I draw strength”

Just as she might be the strength and Goddess, the Almighty had sent for her father.

“I hope that people who can make the difference will do something…Hoping for the best, prepared for the worst”

And that is when we realized what we needed to do. We needed to bring the story before you. You, who had been a force to reckon with whenever the country needed you, are the one she needs at her hour of need.

You have never let justice and fairness down whenever the hour demanded. At this moment she needs your support, your voice, – the only voice that could make all the difference to her and the many soldiers who went missing. You are the only hope for those families who have lost all hope. 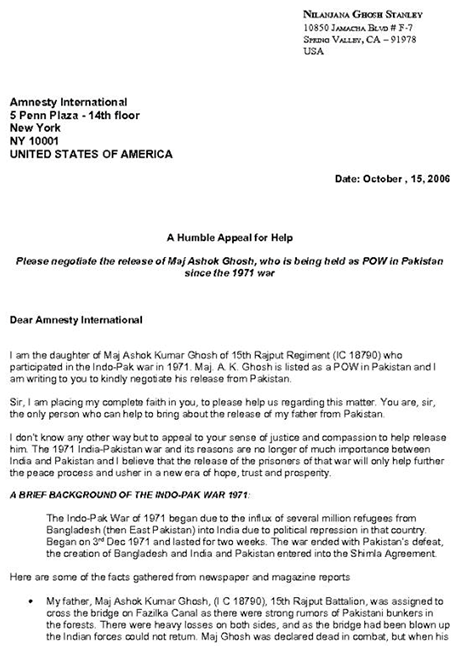 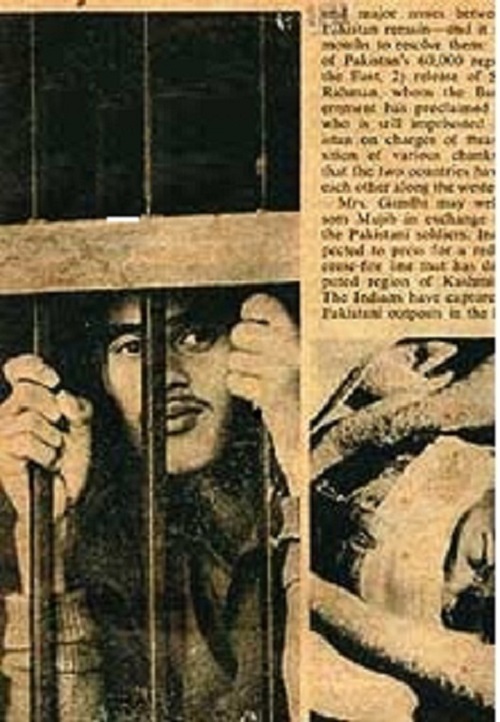 Information reveals that a Pakistani newspaper, “Sunday Observer”, dated December 5, 1971, wrote that five Indian pilots had been captured alive, one of them being Flt Lt Tombay (actual name “Tambay”). The “Time” magazine issue of December 27, 1971 carried a picture of Indian soldiers behind bars in Pakistan, including one identified as Major A.K. Ghosh. Pakistan Radio announced the names of several Indian pilots captured alive, including Wg. Cdr. Gill, Flt. Lt. Harvinder Singh, Flying Officer Tyagi and Flt. Lt. Goswami but the Pakistani Government has never admitted to having these people in their custody.