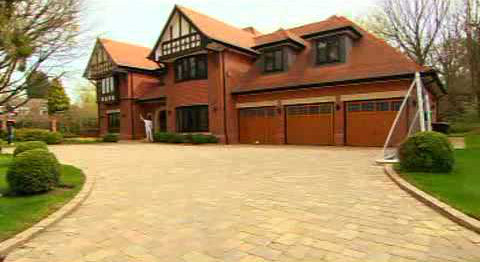 ‘S.C. Rai 2nd/A -24 Shyam Vihar’ – the bronze letters shone proudly on the antique plaque. It was a magnificent old house, painted all green from the outside. The boundary walls were plastered with fragments of green-colored granite and had a rough texture. On a small patch of land outside the main enclosure, a couple of trees swayed in the wind and on three sides there were black steel grills welded to form rectangular patterns. A large, black granite was embedded in one of the walls facing the road.

The house stood in the town of Ghaziabad, near the old Bus stand. It was built in the early 1980’s by my maternal grandfather. He was my mother’s uncle but was very close to her. My mother’s parents used to live in Kanpur in the 90’s and I hardly ever visited them as a child, so this house in Ghaziabad helped me dwell on the mental picture I had for my Nani’s house.

Inside was a garage and the ground floor housed only the drawing room, one master bedroom and a guest room. The drawing room on the ground floor looked much like a party hall to my four-year-old self. The whole house was quite well maintained. A lot of paintings decorated the walls, most of them being works of my Nani, who was an accomplished painter. There was a portrait of a village lady carrying water from a well. A pot rested on the curves of her hips and while an inviting smile played on her lips. That one was my favorites from the lot. Another painting had six lions sitting and gazing up at anyone brave enough to be admiring the frame! On the first floor was a huge terrace (which was later consumed by further construction) and a complex with two rooms and a bathroom, which was mostly let out to tenants. The second floor was dedicated to the servants’ quarters. The central staircase that led up to the upper quarters had white marble tiles, along with green walls. There was also a backyard, which was connected to the kitchen.

I was born on 24th of December 1994 at Yashoda Hospital in Ghaziabad. I have been told that mine was a difficult birth, but somehow I survived to tell the tale. The very first place I went to from the hospital was Nani’s house. But that is just one of the many reasons why the place has been so dear to me. A lot of my childhood memories also stem from this house. There was an ‘amrud’ or guava tree in the backyard and I distinctly remember climbing it when I was four or five. I did succeed in climbing onto one of the branches but the terrified kid that was me, jumped back when I spotted a squirrel! I also remember that I made my first ever telephone call which was to my father at his office from my Nana’s desk at the house.

Nana had worked with the ASI before starting his construction business and had an eye for the best of construction materials. Nani had been an artist and she gave the house the much-needed personal touch with her brush of creativity.

After Nani passed away, my Nanaji decided to sell the place. It so happened that I wasn’t around when the family visited the house for the last time. Later, I made plans to take a day off and drive 50-odd kilometers from my institute to that house, but it never panned out. The title deed was signed on 18th of January 2016 and I’d lost hope of ever getting a full closure. Nanaji had asked us, all the kids, to take away one souvenir from the house and I’d asked for my favorite painting. It only seemed to be making it more difficult to let go of the place which had so many of my fond memories embedded in it. I tried to free my mind of the house, but it haunted my thoughts time and again…

…It was raining that morning in the month of March of the same year. I had come home for the weekend and just wasn’t able to fall asleep. I started rummaging through the old family albums to reminisce. Thoughts about the house and the open-endedness of the broken bond pinched me again, a shade or two more intensely this time. I picked up the pen and started writing about the house, the way it looked, the way it felt, anecdotes that involved the house, everything … as if stubbornly trying to pour out all the memories into the paper would somehow erase them from my heart.

It was around 5.30am when I impulsively grabbed the keys of my father’s car and drove off into the breaking dawn. It was still raining and the horizon was still dark. As I drove through the roads I’d known all these years, I somehow got confused and managed to get stuck at an intersection. The authorities had dug up the road to build the metro tracks and I couldn’t find the diversion. At that moment, it suddenly felt like the universe itself was taking away my right to that road to my memories. Finally, I chanced upon a lone by-stander who guided me and was on track once again. My foot jammed hard on the accelerator, I sped across the empty Ghaziabad roads with nothing but early morning cargo trucks for company. As I neared the house, for a crazy moment I was scared that it might not be there after all. But oh! There it was, just as I remembered – waiting to say its final goodbye. The new owner had not yet demolished the structure. The plaque bearing my Nana’s name was still shining invitingly. Only the color of the house had been changed. The red seemed to me like the red of blood. I could see that the new owner was using the place as some kind of a warehouse. I got out of the car and had a closer look at the changes. It all felt the same. All this while, the sun seemed to have halted its journey to an impending sunrise, giving me some stolen moments with my loved one in the comforts of the dark. I left within five minutes but it felt like the meeting had lasted for hours. I had kept my end of the promise of keeping in touch. I drove back, my mind still clouded with memories. This time, I could easily navigate my way around the diversion. I got back home, all lost within myself. As I got out of the car and headed inside, I began noticingd my surroundings, the sky had lit up to almost a bright blue and the clouds had faded away. The air seemed fresh enough for the concrete jungle that is Delhi-NCR. I had a faint smile on my face and my heart suddenly felt lighter. As my mother opened the door to let me in, I realized that I’d finally put the lock on my Nani’s house, tucking away precious memories in the deep reaches of my heart.

What the new Facebook reactions mean to Brand Marketeers

The Eternal Jazz of Mid-life Crisis