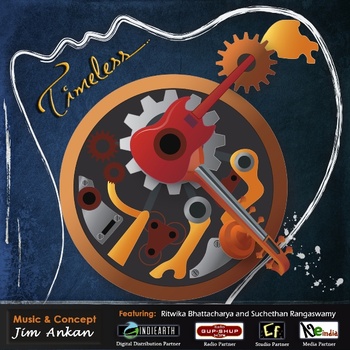 Timeless – A Review by Vinayak Gole

I will be very honest here. I had never heard of Jim Ankan Deka. And when I was asked to review this album, I was in no mood either. It had been a very tiring day and I was just too desperate to hit the sack. But I decided to give it a try anyways.
A minute into the first song, Eastwards, I was already reading about this talented musician on Wikipedia. With distinct Indian tones and a jugalbandi between the Veena and the guitar, this instrumental song is not just soothing but vaguely reminiscent of the good old days of the desi rock beats. Though it would be unfair to compare, this song reminded me of instrumentals by Chakraview. I was already asking for more.
The second song, Shabd features vocals by Ritwika Bhattacharya and is a very bluesy number. Simple lyrics, harmonica, piano and soft bass lines, make this such a soothing number. Ritwika’s vocals are fantastic and the production is impeccable. Ok, so the second song is a like too.
Independence Awakening is again an instrumental, soft, kinda jazzy with a layer of piano overlaying the bass and the soft percussion. Personally, I would have liked a little bit of an Indian instrument into the song, but the layering of the “Jana Gana Mana” into the song, makes up for it. The effect of hearing the national anthem being played on the guitar with a typical jazzy sound is worth an applaud.
Remember your Faith, another instrumental but this time with the Saxophone playing with the guitar.
I couldn’t make sense of the last song. I am not Assamese, but the tune is fantastic and the vocals really good. The video for this song has also been released.
Overall, I would rate the album a 4/5. It is better than some of the recent albums by Indian Bands that I have been listening to. The sound like I mentioned is very much similar to the songs I grew up on. The Great Indian Rock kinds. As for my brother in music who can understand Assamese, this album is a definite listen.
Jim has been a prodigy and I hope he finds better recognition with this fantastic album. Do notice the album art. That’s apt.

Slayer! Can you Slay ’em all?

A wedding and few songs- A musical story