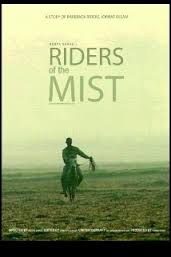 Review: Riders of the Mist | Documentary |

The century old custom has brought about some very beautiful relationships between the jockeys and their ponies. The ponies are free-grazing and live in the grassland river islands of the Brahmaputra Valley. The jockeys who are villagers of the Mishing Tribe have inherited the bareback racing tradition from their forefathers. The 65 minute film captures one such connection between a jockey and his pony. As the film unfolds, it shows the intricate level of bonding shared between the jockeys and the ponies and follows this till the end of the race. For the jockeys, they feel a sense of festivity dawning upon them as they begin by bringing their ponies and taming them for the much anticipated Governor’s Cup Annual Race. Heartwarming. At a recent screening, director Roopa Barua, who is also the writer, spoke about her connection with the race – going back to her childhood when she used to go as a spectator to the race. After a decade of staying abroad, she came back to go further into the lives of the jockeys who are an integral part of the race.

The film has been beautifully shot by Vikram Srivastava, complementing Barua’s vision. Among other credits include editing by Hemanti Sarkar known for her work in films like Bollywood blockbusters Peepli Live, English Vinglish etc. Clearly the director got her team right.

Riders of the Mist is more than just an opportunity to experience the lives of Mishing Jockeys of Jorhat who participate every year in the annual governor’s cup race held in the Jorhat’s Khelmati Gymkhana Club. It is a story needed to be told… and that has been done pretty well.