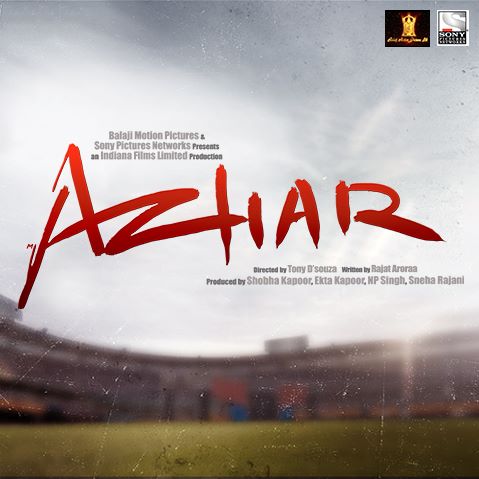 DISCLAIMER: This is a piece of fiction, and does not bear any resemblance to any person living or dead.  It does not claim to be a true picture of what happened and is just inspired by ideas that could have transpired leading to the making of this ludicrous film called Azhar. I do not intend to insult or defame any person through this piece, and it may be read as one random deduction; as indless as the film itself (actually lesser). So here goes…

Despite the Andhra Pradesh High Court ruling in favour of the former Indian cricket team captain, nullifying the life ban implemented on him by the BCCI from the game, it hardly made any impact towards salvaging his reputation. As an unhappy Azharuddin sat wondering how to tell the world of his victory he saw biopic on Milkha Singh being planned and executed. Voila, that’s precisely what he needed.

Azhar approaches Anthony D’Souza, who now prefers being credited as Tony D’Souza, probably to hide from what he did in Blue and Boss. Tony figures it is one hell of an idea, a biopic on Azhar! A film that would have cricket, betting, two heroines, songs… and even some kissing scenes! What more can one ask for?  And all that in the name of Azhar, who is too willing to lend his name to anything as long as it glorifies him.

Tony now takes the idea to Balaji Motion Pictures, who salivates at the possibilities of the number of brands that can be brought on board for in-film advertising. A film on a cricketer where you can push in brands into almost everything – from his bat to his underwear (I kid you not, there is one entire scene dedicated to the underwear the hero wears, along with a close up of the brand). That alone should take care of the cost of the production. They then take the idea of this commercial to Sony Pictures, who loves the idea of getting such ‘promising’ content for such low cost. The expense would be lesser than what they may have to shell out if they buy satellite right of certain A list films. Here they have perpetual content – Wow!

Hence a project is designed. They get Rajat Aroraa to write the screenplay and dialogues. Because after all a character like Azhar needs to mouth dialogues that can draw whistles.  Now they get Emraan Hashmi who kisses like none other. All’s set! They even decide to shoot stuff in England rather than India. Just make it look cooler.

Somewhere in between the entire team forgot that films are made on scripts; scripts that make sense. Scripts that tell a story rather than aim at glorifying people! Probably they realized somewhere down the line that this does not quite look anything like a true story. Bingo, do a Bhansali – put a full slate disclaimer how the film is just inspired by certain events in Azhar’s life and not really biopic. Base covered.

To be fair in between all the brand promotions we also get to see some nice flicks and cover drives. And one catch too, Emraan jumping high up in the air. The actor actually shows sincerity. But his efforts are cleaned bowled by Nargis Fakhri’s expressions (lack of it) and the director’s capability of making even the serious appear jocular.

On hindsight, the film does what it was meant to do. It venerates Azharuddin, making him sounds like the savior of Indian cricket rather than the one who allegedly sold his soul out. Irrespective of what Azhar did, the film reeks of soul-selling throughout.