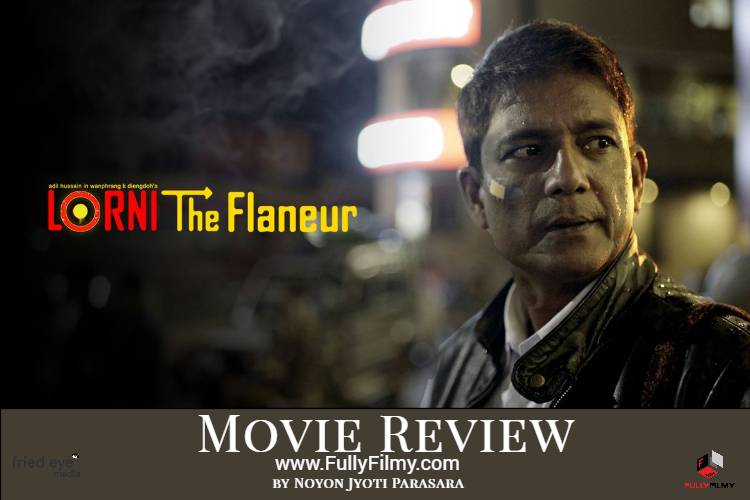 Disclaimer: I am excited to see a film from Shillong on a major streaming platform. Especially a film that is mostly Khasi. That’s a first. As someone from the northeast, I think this is a major step forward for stories from the region.

Being from where I am does not mean I tint my viewing glasses all pink. But my identity does allow me to understand the context better. Hopefully.

On the face of it, Lorni – The Flaneur is about Shem, a private detective. His empty calendar says he is not packed with work, but his too proud to admit so as he plays the busy bee when a possible client walks in. Shem (Adil Hussain), is hired by an elderly woman to find a heritage ornament that has evidently been stolen. The suspect – the gardener, who happens to be a Hindi-speaking non-tribal. Shem follows the gardener around to gather clues, only to find much more than he intends to…

The alleys of Shillong lend themselves beautifully to a mystery thriller, which this film could have been. But Lorni does not intend to be one any more than we wish to watch bad movies. The story is instead about Shillong itself, rather than a story set in it.

Set in an age that sees tremendous churn every day, Lorni – The Flaneur is about a small town caught in the middle of the fast-changing world, and the no-so-fast pace of the town itself. As the name – Flaneur – indicates, this is about a man’s vision… of his observation and perception. Of Shillong, and ever such quaint towns who find themselves, at times unsure, at the cusp of change.

One of the primary issues explored through this film is the idea of identity and culture. The northeast of India, easily one of the most diverse regions in the world in terms of tribes and languages, has forever been raising questions about identity. Home to around 220 ethnic groups, if not more, and as many languages, the issue of identity has turned into one of the most important talking points in a world that is rapidly globalised.

In such a world, somehow on the surface of it, Shillong seems unchanged. As signified by the lazy lifestyle, people finding enough time to sit and chat by the roads, and down mugs of alcohol in the middle of the day at local bars as they discuss everything – from local crimes to myths. And yet there is a restlessness depicted by Esther (Dawiat Syiem), who is temporarily back in Shillong from Delhi. She finds no reason to stay back in Shillong – a town that offers little opportunity for her. And yet she knows her identity is important to her as we get to know later in the film. Diametrically opposite is Esther’s mother Dolores, for who holding on is important. Holding on to customs; holding on to stories that define who they are.

The conflict is also showcased through the number of times the words tribal and non-tribal are used. And then passing remarks of how the Khasis are respectful and have a sense of shame while a couple of men discussing a crime, as they reason that the crime must have been committed by someone “non-tribal”.

The mistrust is emboldened as our protagonist, Shem lies about his tribal lineage at least once… clearly an attempt to fit in and not be seen as an outsider. Adil Hussain shines as Shem, in a role that puts him on the screen in almost every scene. The film opens with him, covered in blood from what looks like an accident. Visuals are brought back every now and then to symbolise conflict as Shem finds himself attracted to Esther… till we are finally told much later in the story what the accident was all about.

The other actors, most of who are first-timers, add beautifully as they find themselves at the ease of being amidst familiar settings.

One of the most telling lines in the film is when a Samaritan tells Shem that the next thing that will be stolen is “stories”.

Lorni – The Flaneur is extremely layered, almost to the point of being difficult to grasp. And therein lies its strength and biggest flaw at the same time. It almost personifies the conflict the director wishes to convey… For the ones who can get past the pace, Wanphrang K. Diengdoh’s debut film is like a rare delicacy – one you need to acquire a taste for and then would swear by it.

Lorni – The Flaneur is available on SONY LIV.