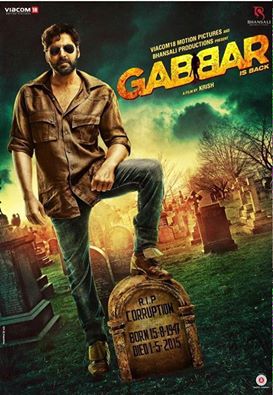 Movie review: Gabbar Is Back

Gabbar is Back is a movie that, if released a year or two back, would have easily gone into the hundred crore club. Not to rule out it chances now but after Ungli, Jai Ho, Shivaji The Boss and the likes, there doesn’t seem to be much novelty in either the plot or the characters. Although the concept is not entirely facsimile but it’s not that original either (this is a remake of a 2002

Tamil film Ramanaa). The story revolves around one Gabbar who abducts and executes corrupt government officials with such ease and deftness that willing suspension of disbelief becomes a prime requisite in order to relish the movie to the fullest. Why Gabbar has become the person he portrays is what makes up the plot of the movie.

The movie is evidently an audacious commentary on the ‘system’ of which every other common man is a victim and as long as we put a deaf ear to it, we cannot expect it to change. Gabbar uses wrong means, no doubt, but the righteousness of his ends warrants him to proudly say, “Jab dur kisi office mein koi officer rishwat leta hain toh log use kehte hain mat le warna Gabbar aajayega.” Akshay Kumar undoubtedly has done adequate justice to his role and so have all the other actors, barring Shruti Hasan whose part in the film is nothing more than an icing over the cake.

Conclusively, debutant director Krish’s Gabbar is Back is a movie that’s going to motivate you. It might enable you to stand up for your own rights, give fuel to the ‘fire burning inside your heart’ and make you say that enough is enough! It is a decent mainstream entertainer – something we have not had in some time.