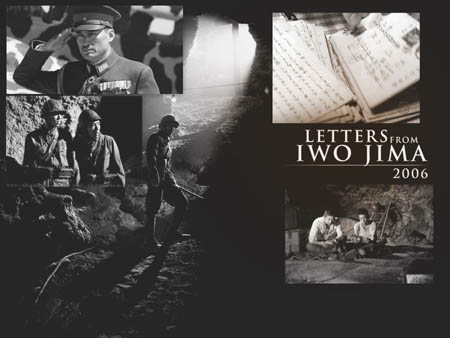 We dig all day.

This is the hole that we will fight and die in.  …”

World war movies have always captured our human reason and fearful hearts. Be it Troy, Life is Beautiful, or the Schindler’s List, such films aspire for a peaceful world; the real chase of our 21st century lives.

From the actor-director, Clint Eastwood, Letters from Iwo Jima, have enjoyed phenomenal success in Japan, the United States and the world over. It was made as a companion to the American perspective displayed Eastwood film, Flags of our fathers.

Letters from Iwo Jima, the story of the Iwo Jima battle from the Japanese perspective, made nearly 5 billion yen at the box office in Japan, and won an Academy Award and other major awards like The Berlin Peace award in the United States.

The tales of the soldiers are explored by Japanese archaeologists while finding the letters buried under a tunnel. Every letter unfolds in its poignant manner the Japanese experiences at the U.S’s invasion Of Iwo Jima, a historical event in 1945, World War II. Many of us must have an idea of  the battle of Iwo Jima, by the widely circulated Joe Rosenthal’s photograph of the raising of the U.S. flag on top of the 166 m (545 ft) Mount Suribachi.

The theme of chauvinism towards the imperial regime runs through scenes of brutal mass suicides. Amidst the despair, hope is shown in the character of Private Saigo played by  Kazunari Ninomiya who even in the hardest times dreams about his pregnant wife receiving his letters. This film brought General Kuribayashi’s story to an international audience for the first time. Kuribayashi , the patriotic commander who fights for his ‘fallen brethren’ till the end was portrayed by Japanese actor Ken Watanabe. His letters to family goes back to his glory days of military training at U.S. showing the contrast between the times of friendship and enmity.

Critics in America claim that, in the era of terrorism and the Iraq conflict, this film is mostly about the humanity of the enemy, while those in Japan celebrated the film’s anti-war message and its largely unbiased portrait of Japanese. Many films have been made on this neo-nationalist Japanese subject. This film clearly depicts a collective public memory. The young and old spoke of being sincerely moved by this film, often praising it as “this was a movie Japanese should have made.” These words show that, to them, it was not that important that Flags and Letters were products of the same director, even though they divide the battle over Iwo Jima into American and Japanese perspectives.

Letters from Iwo Jima was a positive opportunity for spectators in both Japan and America to discover heroes, so many of whom have been buried in the sands of time. One of the main reasons Iwo Jima was more favorably received by American spectators was because it was beautifully presented and viewers could intimately connect to. ‘Doc Bradley’ in Flags and ‘Saigo’ in Letters perform the same narrative function, but it is interesting to note that Saigo is probably a character closer in spirit to not only  contemporary Americans or Japanese but the entire soldier race.

The Japanese kindness is revealed in the scene where the soldiers treat the captive American Sam and a letter from his mother is read after he is dead. The letter largely touches on the fact that all enemies suffer the same fate.

The lines of the soldier Shimizu, “I don’t know anything about the enemy. I thought all Americans were cowards. I was taught they were savages”, deconstruct the opinions about the “other”.  Amazing actors, images and the soundtrack composed by Kyle Eastwood & Michael Stevens qualified this movie at the Golden Globe for the best foreign film.

Letters from Iwo Jima raises questions about heroism and the need of pacifism in the post colonial era.

Made in Japanese almost, I give it a rating of 4.

This movie leaves me immersed in deep thoughts about the futility of war, and compels me to ask the readers, – “If we are all mirror-images, where is the enemy ? ”