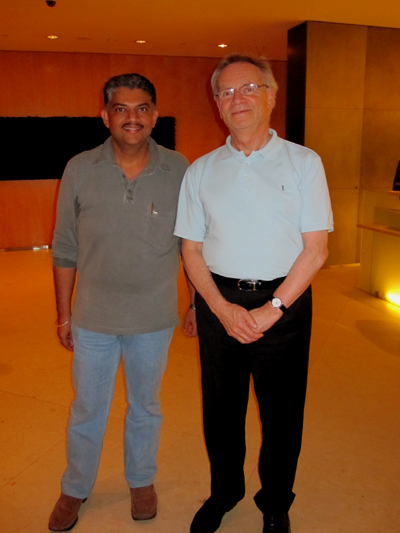 Jefferey Archer – As I See Him

What else but best sellers can be expected from an author who can begin a story with the lines, “Tomorrow it would be 1 AD, but nobody had told him.” At 70, Jeffrey Archer has seen it all. He was an MP before he turned 30, was almost a bankrupt, did time in prison and got into many controversies. But nothing can beat his way with words. Says he; “Some people can sing, some can dance, I can’t do any of that. All I can tell is a story.”

For some it would be Kane and Abel while for others it could be The Prodigal Daughter – these two are the books that made Jeffrey Archer famous; he himself attributes Kane and Abel as his best work till date.

While I was up to date with all his novels and short stories even when in high school; there was one of his short stories that I was unable to understand; even after repeated readings. The First Miracle; was a short story beautifully written as only Jeffrey Archer can, but for me the message was lost. It took me 2 years before I realized what a gifted writer he is, as the message finally dawned upon me. I am not going to reveal the suspense here, except that it is related to the birth of Jesus Christ, so pick up his short story volume: A Quiver Full of Arrows, and read it (and in case it does not make sense, write to me). The author with Lord Jeffery Archer

In the writings of Lord Archer; I have learnt as one usually learns from a book of philosophy or self help. In my opinion; his writing is like fine wine, it has mellowed and matured over the years. In fact I have reread most of his recent works and it is my staple reading material while on tours. Like an adrenalin junkie looking for the next high, I read Archer and get a fresh kick every time I read those few lines that give me inspiration.

For those seeking to know a new meaning into things that we take for granted, read the following books and get to know insight as only Lord Archer can do so:

Reputation: In the book, “As The Crow Flies”, the main protagonist; Charlie Trumper Jr.  goes to a lady selling wheelbarrows and wants to do a trade-in. He is shocked to hear the price of a new wheelbarrow, but tells the lady that he will pay a few pounds also trade-in his grandfathers’ wheelbarrow. The lady is wary but asks, “Who is your grandfather?”, Trumper Jr. Replies “Charlie Trumper is my grandfather”. The lady immediately agrees to the deal. Charlie then discovered what “reputation” meant.

Points of view: We often think of things being seen as right or wrong; yes or a no; black or white. Jeffrey Archer does an absolutely wonderful job in “A Prisoner of Birth”. In a gripping courtroom drama, a witness says “My lord, I have discovered with advancing years that few things are entirely black or white, but more often different shades of grey.”

On love: No, he did not write a romantic novel; yet. But in his absolutely nail biting dramatization of George Mallory’s ascent of Mount Everest in Paths of Glory; Mallory writes a letter to his wife 27,300 feet above sea level before attempting to scale the unconquered. The last two lines of a letter perhaps may put Romeo & Juliet to shame, for the lines are – “Forgive me for having taken so long to realize that you are more important to me than life itself.”

I am often confused in deciding which of his works is the best. I fail to stack rank his writings. With each new novel, he seems to be doing better than the last one. Take part one of the five-part, The Clifton Chronicles, Only Time Will Tell, for instance. The novel is simply a page turner.

The last line of each chapter brings forth a twist taking the reader through a labyrinth of events across the life of Harry Clifton. In 388 pages, Archer has created magic. Don’t miss it and keep a watch for the other parts too.

India has been a favourite destination of Lord Archer for the last few years. Visit his Facebook page and you will know why. He claims to have majority of his fans from India. In a bookstore in Bangalore alone there were over 1500 fans wanting to get his autograph.

A die hard cricket fan, I met him in Singapore airport when he was transiting from Australia to UK, returning back home after a month long book tour. It was the evening of the World Cup finals and India was playing against Sri Lanka. The airport did not have a single TV set telecasting the match. When I was getting my book signed, Lord Archer commented that he was surrounded by Indians who could not show him the match live. I admit I am no cricket lover but a lover of technology. In a moment of bravado in front of my favourite writer, I said give me access to a PC with internet and I can show you the match. That’s it, I logged on to a live stream website and the rest as they say is history. With a meal of a salad and a diet coke, sitting in a cramped book shop store room, I too enjoyed the game.

R K Narayan is a favourite author and Lord Archer loves Malgudi and the characters of Narayan.  India and Indian readers remain high on the agenda of Lord Archer and you can be assured of a visit once every two years.

Watch out for his book tour announcements from the links:

About the author: Nagaraj Prasadh is often caught in a dilemma as to who from R K Narayan, Jeffrey Archer and Fredrick Forsythe is the best writer. An answer he is seeking for over decades now. Not diagnosed with being a compulsive reader, yet; he reads anything printed (including the Pondicherry telephone directory). Based in Singapore and when not reading, he heads the Human Resources & Operations for Polaris Software Lab Pte Ltd. He resides at nagaraj.prasadh@gmail.com

Leading From Pole To the Chequered Flag