PETA- Helping Animals While on Holiday

Animal abuse knows no boundaries or borders. When you’re planning a trip, don’t forget to prepare yourself for the animal displays you are likely to encounter in your travels. There are many activities that compassionate travelers should avoid as vigilantly as they would a bout of Delhi belly.

Throughout India and other parts of Asia, elephants spend most of their lives chained by two legs waiting for tourists to buy a ride.Thailand is the world’s largest promoter of elephant camps where the barbaric Phaajaan (“breaking the love between”) ritual is used to break baby elephants and force them to submit to humans. In these training camps, still-nursing baby elephants are dragged from their mothers, bound with ropes and steel cables and immobilized in wooden cages.  They are beaten mercilessly for days while deprived of food, water, and sleep. They are gouged with nail-studded sticks. The babies panic, collapse in exhaustion, defecate in fear, and scream out in terror and pain. The elephants will continue to suffer as long as tourists use them for rides.

Ditto for tiger cubs who are ripped away from their mothers to be used as photo props.  Around the world, breeders churn out countless babies who quickly grow too big to be used. The fate of the adult tigers is grim. According to a former volunteer at Tiger Temple in Thailand, many of the tigers simply “disappear” from the facility when they inevitably become impossible to handle.  Make no mistake: No legitimate rescue organization, which is what most of these outfits claim to be, would ever subject young animals to the stress of travel and manhandling. If animals are being exhibited, the motive is profit, plain and simple.

If you travel throughout the Caribbean, steer clear of “swim with dolphins” programs. These profit-driven ventures are strongly promoted by tour operators, particularly cruise lines. Dolphins in these programs live in misery to satisfy tourists’ curiosity.

In their rightful ocean home, dolphins establish close, cooperative and long-standing relationships. They swim together in family pods over vast distances. Dolphins have complex communication, and will form rafts with their bodies to support ill or injured members of the family so that they can breathe. Please, never buy a ticket to a “swim with” program or dolphin “encounter.”  You’ll go home with a photo and a story; the dolphins will be in the same cramped tank or confined space until the day they die.

Horses used to pull carriages suffer tremendously. They are forced to pull oversized loads in heavy traffic and are often whipped to force them to move forward. Many horses collapse from exhaustion or lack of food and water. They are always forced to avoid careless and impatient drivers–not always successfully. Carriage and automobile collisions and other accidents have occurred in nearly every location where horse-drawn carriages are allowed. Many horses have paid with their lives. These rides are cruel and caring travelers should always avoid them.

Never spend an afternoon at the zoo. Try to imagine living your entire life in the same cramped space. We cherish our freedom to come and go as we please, deciding when and what to eat, hanging out with people we like and avoiding those we don’t, choosing our companions and deciding whether or not to have children. Yet animals in zoos are denied all of these important choices resulting in them expressing severe frustration through stereotypic repetitive movements not found in animals in their natural homes, such as constant circling, swaying, repetitive head bobbing and so on. Animals belong in their natural homelands, not in zoo cages under the self-serving pretext that they are being protected.  The vast majority of animals kept in zoos are not endangered nor being prepared for release into natural habitats. If wildlife as we know it is to survive, the primary focus must shift from collections of animals in zoos to habitat preservation in the wild. Keeping animals in cages has no positive effect whatsoever on fostering respect for animals in the wild.  They are still hunted, poached, captured for display and harmed in other ways.

If your travels take you to Mexico, Spain or France, never be tempted to go to a bullfight “just to see.” The only thing keeping the fights alive and the bulls dying are tourists. Curious travelers buy tickets or simply go along with what’s included in their travel itineraries. Before being led into the ring, bulls are teased and provoked to get them agitated. Once in the arena and surrounded by screaming crowds, the bull is made to run in circles and is repeatedly stabbed in the head, neck and shoulders with knives until he is dizzy, weakened from blood loss and suffering agonizing pain. The exhausted bull is already near death when his spinal cord is cut, but the bulls are often still conscious as their ears and tail are cut off as “trophies” and as they are dragged from the ring on chains. By the time an appalled spectator rushes out in horror, the damage has been done: The money spent for a ticket has gone to support the killing, and more bulls endure a painful death.

Bulls are also tormented in a pastime called jallikattu in Tamil Nadu, India. Although using bulls in performances is illegal in India, jallikattu continues to take place in this state. Observers at several recent events witnessed participants twisting and breaking bulls’ tails,  rubbing irritating substances into bulls’ mouths and eyes, forcing  liquid – likely alcohol – down bulls’ throats, poking and hitting bulls with knives and sticks. People and bulls have both been seriously injured and killed. 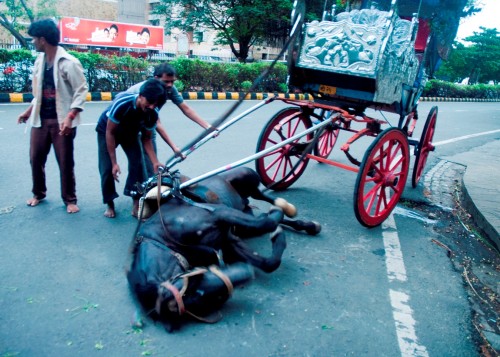 Everyone likes taking home a few souvenirs, but don’t buy anything that has cost an animal their life.  Starfish and sand dollars are the dried-out bodies of dead sea life.  Anything made from bones, feathers, horn or teeth (ivory) is a body part.  Shark paperweights or scorpions in plastic are tombs. If you buy, animals die.

Above all remember this: The laws protecting animals throughout the world vary widely and in many parts of the world, there are none. Every ticket a tourist purchases to a zoo, or for a photo, or to a bullfight, helps to perpetuate the misery of animals who are used to make money. Please pack your compassion when you travel and come home knowing you didn’t help to support the cruel cycle.