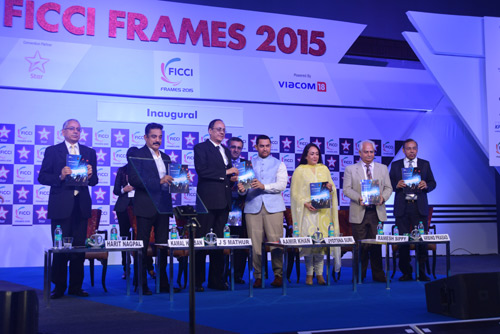 MUMBAI, March 25, 2015. India could well become a global entertainment superpower, provided key enablers such as flawless and timely execution of policies and  interventions at a local level like speeding up permissions for multiplexes, live events and film shoots are put in place by the government. For the Indian media and entertainment players it is imperative to have tailored content strategies for global, national and local audiences and a focus on building the relevant digital and physical touch points to enable easier and more open and interactive access, says the FICCI-KPMG  Indian Media and Entertainment Industry Report 2015, titled ‘Shooting for the Stars’. The report was released here today at the inaugural session of FICCI FRAMES 2015.

The report notes that India’s significant consumer market base, and increasingly favourable macro-economic and regulatory environment have prompted several investors and global players to look to the Indian market for growth.

Their optimism stems from the fact that the building blocks for future growth have been put in place in 2014 – such as new spectrum for mobile, ongoing digitization in cable, consolidation in exhibition, and Phase III auctions for radio. With the advertising boost from the ICC cricket world cup, strong projections for economic growth and on the base of these building blocks, 2015 holds great promise for the industry. 2014 has been a turning point for the Media and Industry sector in India in many ways. Post general elections, with a stable government at the centre, business sentiment has been positive and bolstered by a number of growth promoting policy initiatives taken in the recent months. A benign external environment and the presence of a stable government prompted the Economic Survey to suggest that India has reached a sweet spot and could finally be launched on a double-digit medium-term growth trajectory. Top global institutes also have an upbeat view on India. Rating agency S&P called India the Asia-Pacific region’s bright spot while the International Monetary Fund revised up India’s growth forecast, expecting its growth rate to surpass China’s in 2016.

The FICCI-KPMG report points out that in the media sector, digital media continued its rapid penetration, as indicated by the stupendous 44.5 per cent growth in digital advertising in 2014 over 2013. One of the major highlights in 2014 was the announcement of ‘Digital India – A programme to transform India into digital’ by the new Government at the Centre. India topped as the world’s fastest growing smartphone market. By the end of 2014, India had around 116 million internet enabled smartphones and the number is expected to reach 435 million by the year 2019. This growth presents a good opportunity for digital content aggregators, advertisers, app developers and online streaming companies to engage users through relevant mobile-led strategies.

The absolute number of internet connections was at a record high in 2014. With almost 9 per cent penetration of social media, India’s potential for social networking on the internet is on the rise. 41 per cent of India’s total mobile users are active on social media. The digital music industry witnessed a good deal of buyouts, sell-outs and new entries jockeying for position. The revenue from distribution of music through digital channels already accounts for over 50 per cent of the overall size of the music industry in India.

In television, advertising saw strong growth, driven by the general uplift in the macroeconomic environment, the general election spends, and the emergence of e-commerce as a significant new advertising spender. At the same time, despite rollout of digital set top boxes STBs as a part of the ongoing DAS, the anticipated improvement in addressability, increase in subscription revenues and more equitable sharing of subscription revenues continues to evade the industry. A key challenge remains the lags in implementation. The MSOs are taking time to build internal processes to reflect the change in business model from B2B to B2C. This, coupled with continuing resistance from LCOs, has resulted in delays in implementation of gross billing and rollout of channel packages in Phase I & II cities. The Ministry of Information and Broadcasting  has now extended the deadlines for Phases III & IV of DAS implementation to 31 December 2015 and 31 December 2016, respectively.

The print sector continues to remain a highly fragmented space, at the national and regional level. In 2014, the print industry witnessed a rise in circulation revenues on the back of rising cover prices and subscriptions, aided by low media penetration, population growth and rising income and literacy levels. This growth largely came from tier II and tier III cities with regional language editions outperforming the national editions and English dailies. While the sector has not seen cannibalization in revenues from digital media, on the lines of the global trend, it is clear that the time has come for players to embrace digital strategies that complement the existing physical product and support brand building and penetration efforts.

The films sector was a mixed bag in 2014 with some films creating box office records, while several were unable to attract audiences to the theatre and profitability was impacted overall. The exhibition sector saw several players expanding their footprint – both organically (especially in tier II and tier III cities) and through acquisitions. The cable and satellite market also saw correction. Regional films continued to see success, in particular the Tamil and Telugu markets. Going forward, with an increasing number of multiplex screens and better internet penetration and bandwidth Tier 2 and Tier 3 cities may soon hold the prime focus of the industry.

The radio sector saw much awaited movement in Phase III auctions, with the Government giving the go ahead for partial auctions across 69 cities, potentially 135 channels. Though some key contentious issues of exorbitant reserve prices for the auctions, the 15% limit on the total number of frequencies that an entity may hold, as well as dearth of new frequencies in the profitable A and A+ cities remain, the commencement on Phase III provided the required fillip to the industry which hopes to revive its fortune with these new developments.

3-day FICCI FRAMES 2015 gets under way in Mumbai