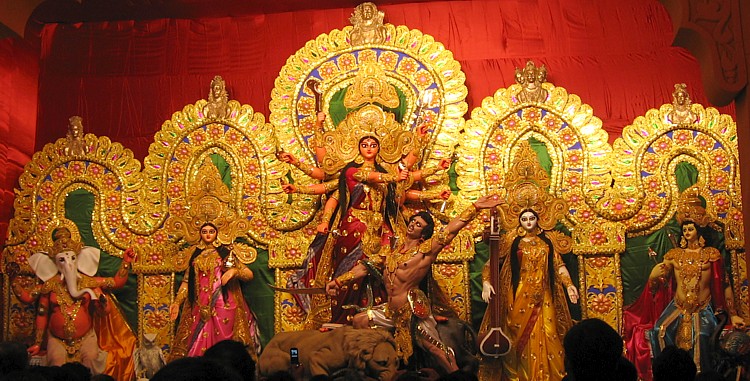 There is something about the month of October that makes you feel gay, and I’m not alluding to Section 377 of IPC here; well of course it marks the start of the festivity season for us Indians, albeit technically it starts with Ganesh Chaturthi in the month of September, but then, October is when autumn makes its presence felt. The simmering sun of the summer gives way to the late-monsoon cool showers! And the golden leaves of the trees glitter in the mellow sunlight like gold! In Robert Frost’s words:

Thy leaves have ripened to the fall;

Tomorrow’s wind, if it be wild,

Should waste them all.

The crows above the forest call;

Tomorrow they may form and go.”

And when we’re talking about October, how can we miss Durga Puja? As a child, I had fond memories of Durga Puja. For as long as I can remember, Durga Puja has been one big festival that I looked forward to eagerly, every year. There were plenty of reasons for that. Well to start off, after the long summer vacation, the two months of classes in the sweltering heat of August and September makes your life miserable and you begin to yearn for holidays again. Moreover, it’s the time when you can chill out with your friends or have a big family get-together where you get to meet your cousins, uncle, aunt, grandparents, or even long-lost relatives! 😛 It turns into a bonhomie of sorts!

So what’s great about Durga Puja? Different people have different reasons. For me, firstly it has to be the pandal hopping, the khichdi served at the local puja, the ubiquitous jalebis, and eating-out with friends or family, in that order. As a child, and I say this without a doubt, the 25 rupees plastic gun would have topped that list. And of course, those red-coloured coils of ammunition, stacked neatly in small, circular packets with a pink-coloured lid and a brown-coloured base, fondly called as guli. If you happen to buy dozen of them, there is a strong chance that you might find a picture of a mighty lion on the face of the packet. A Durga Puja without the pistol was of course something unimaginable! A blasphemy, if you ask me. Or else, how are you supposed to ward off the other kid from some godforsaken place, who walks into your neighbourhood and tries to be a smart-ass by showing off his long-nozzle gun and firing at will. So what do you then, with so much at stake? You gang up with your pals and ring the air with interminable firing shots so as to drown the shots of that smart-ass kid. The sheer pleasure when that other kid retreats in silence after receiving a thundering response. Now that I think of those war-games, it makes me feel somewhat embarrassed. Childish play, they say. Now that you’re grown up, you’re supposed to act in a matured manner. Ironically, it’s the mature mind that makes all the wrong decisions in the world. Ah! I sometimes wish I didn’t grew up at all and time-freeze myself in those yesteryear memories. If only wishes were horses then even beggars would ride!

Times have changed. The plastic gun has been replaced by Chinese-made air-guns and the gulis of yore have given way to tiny, yellow balls, which has now turned into a rage. But one thing’s for sure, just as you can’t take away a Smith & Wesson Model 36 from Michael Corleone in The Godfather, it’s hard to replicate the charm of holding that plastic gun and pulling  the trigger unleashing a spark and the sweet smell of gunpowder.

And of course, there are the balloons! The streets seems to be magically transformed into a balloon-land all of a sudden, just before the Puja. All kinds of balloons are on offer, of various shapes that comes in different colours: red, yellow, green, blue; take your pick! I believe most kids fancy the spherical-shaped balloon just because it’s the largest amongst the pack.

Another great thing about the Puja is that it also acts as a melting pot in a society of seemingly overwhelming disparity. The fervour of Durga Puja sweeps through every household, through every heart, young and old alike! The excitement reaches its crescendo during the Maha Ashtami and Maha Navami , when the streets are full of people moving in horde, and there is mad rush to visit the most beautiful pandals in town.

The last day of the festival, i.e. the Vijayadashami, marks the victory of the Goddess Durga Maa over the evil buffalo demon Mahishasura. Well that’s the innate message, isn’t it? The victory of good in its battle against evil? With the rise in corruption in the country, perhaps we need more than a token form of worshipping the Goddess and more practise to ward off all the evils! Nevertheless, the last day always leaves a tinge of sadness in everyone’s hearts and we look forward to the next year when the Goddess will rise again, riding on top of a ferocious lion, to fight the lone battle of good vs evil. On the bright side, the festival season has just started and we wait with bated breath for the next big thing i.e. the Diwali or the ‘Festival of Lights’! Moreover, Winter is Coming!!! 😛

Evolution of the E-market