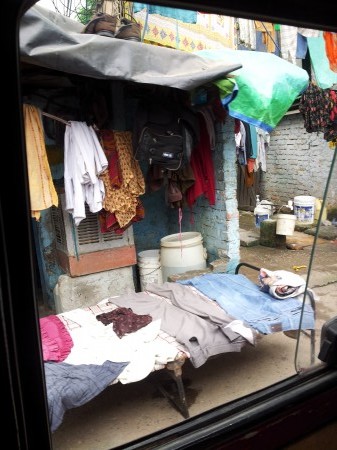 Dark side of Poverty

Do you know there is a dark, very dark side to poverty? Have you ever been to a slum, the underbelly of a city? Tried to peek inside a shack? Tried to absorb how it feels to be there? Can you imagine yourself in a slum for a night? Was that a shudder that we sensed?

Yes unimaginable , right? The  thought itself is so distressing that we never let it harbor in our minds and thus the word Poverty becomes an abstract thought.

Do you know even the bravest of men will fear to tread in slums and such colonies as dusk sets in, unattended and unescorted?  It is because there is a dark side to poverty. Crime breeds in it uncontrolled.

Do we hear injured voices accusing us of slamming the downtrodden without giving them the chance of defending themselves? Well please have patience. The voice of Fried Eye is never without a purpose nor without logic. We never speak about any issue unless we have points to justify it. We never question until we have a defense.

Let us get our statistics right first before we proceed on to the topic.

37.2 percentage of people in India live below the country’s poverty line.

According to a recently released World Bank report, India is on track to meet its poverty reduction goals. However by 2015, an estimated 53 million people will still live in extreme poverty and 23.6% of the population will still live under US$1.25 per day. This number is expected to reduce to 20.3% or 268 million people by 2020.[25] However, at the same time, the effects of the worldwide recession in 2009 have plunged 100 million more Indians into poverty than there were in 2004, increasing the effective poverty rate from 27.5% to 37.2%.[26]

From March 12, the Poverty line of India had been reduced to Rs 28/day improving the statistics, but not the over all condition funnily.  In fact in a public website, it was stated that probably India had the most disputed poverty line in the world. 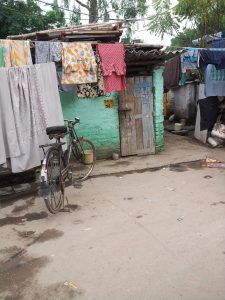 Not always are all the rich corrupt , nor the poor innocent. But we are not blaming them. It is the stress , the frustration, the sense of helplessness, the war for survival ,wallowing in self pity , thriving upon purposeless charity that leads them to negativity and finally they start becoming comfortable in their condition. No we are sure it is not acceptance, but rather a sort of being at home with it. It is a sort of controversial statement we admit which may appear insensitive to a few but one cannot deny the element of truth in it.

The other day near the Old Delhi railway station, three men, all healthy and who looked quite capable of labour picked a pocket of an elderly man in broad daylight , witnessed by a shocked FE team member. They were from the nearby slums where petty crimes such as pick pocketing, chain snatching, gambling , ganza peddling and prostitution are common.

A little beggar boy ran away with the cell phone of a lady in an autorickshaw in a traffic signal point when she was distracted while trying to find some loose change for the same beggar boy.

A comparatively cleanly dressed elderly lady is always seen near Hauz Khaas metro station asking for money to go home from passer by -her excuse being that she lost her purse.

A jhuggi  jhopdi colony was built for the Punjab riot victims and once who belonged to such affluent families are now living in total decadency. 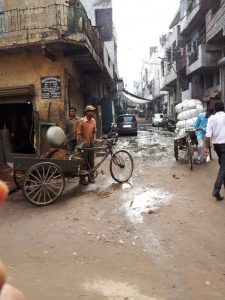 Sometimes charity isn’t enough ,you see,  to alleviate poverty especially if it is unsubstantial and purposeless. It just feeds their instincts of thriving without any effort and in a twisted way provide them with an incentive to remain as it is- Never to rise above the condition that they are in.

Unemployment is an issue all right but that is not the core issue. Those three men would have been hired in numerous construction works going around all over Delhi , but they wanted things easy. They had an alibi- they are poor.

The beggar boy begs because he knows you will fall for his sad face and hand over some money. The feel of money on hand is better than any school or midday meal or thoughts about future. When you give a ten rupee note you are not helping him in any substantial way, you are just feeding  his greed.

Help, not charity, is the need of the hour. Give only when he or she deserves it or has worked for it and the amount that he deserves – not less nor more.  Do not reward poverty, for it will trap with its tentacles the same person whom you are trying to help.  Do not exploit  a poor man, but do not exploit his sense of deprivation and insecurity either. That’s how crime and corruption starts- Insecurity.

Even in mythology, Rukmini Devi , the consort of Lord Krishna had advised him to give only that which is enough when Krishna was bestowing his generosity on Sudama. Let not your generosity kill the same person whom you are patronizing.

The Government has many poverty reducing policies but it hasn’t met much success. We feel that probably more than the policies what they needed was a strict sense of “work and you will get what you want and deserve” incorporated into them. We have heard of allotment of low cost housing to slum dwellers  by the Government. But it was also reported that they used to sell them or let them on rent while they continued living in the slums, waiting for some more policies and more benefits. 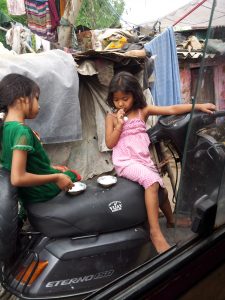 Children are seen selling the free cough syrups that their mother and grandma got from the free health clinics.

Drug users and petty criminals commit some crimes every winter so that they can get free boarding and food  inside the prison (as narrated by an inmate )during the bitter cold.

A maid of a very generous old lady used to make up sob stories just to win her trust and sympathy.

Adminstration and NGO s are trying to handle the core issue to their best of capabilities. They have laid stress on infrastructure, health, education, self employment – the key sectors of development but some loopholes and deficiency are still there in multiple levels so as the policies not being able to deliver an impact.

One of the reason, we thought might be the abrupt cessation of all benefits once the poverty line is crossed. Free housing, loans, benefits  are available till you are below the poverty line , but once you have crossed over , they neither have ceased being poor, but again the organizations do not consider them poor enough to be aided. Just like some medical conditions need rehabilitation and drug tapering, alleviating poverty might need the same principle. Once you help them survive and cross them over to the next level, there should be, we feel, a temptation or lure to move forward-An incentive that do not make them go back from where they came and instead make them move forward.

If so much funds and resources are used for eliminating poverty , then a few crores wouldn’t be that heavy a burden to stratify the community and utilize it in an organized way, right?

A sudden struggle after being pampered most probably unnerves them and makes them go back to their begging, theft and drug peddling and to the safety and security of their Govt authorized slums and colonies.

That is the Dark side of Poverty

Morpheus Abagnale – Welcome to Disturbia by The Lightroom Poets
Editorial