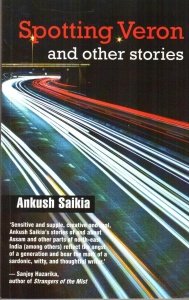 The stories in this collection are very real and describe the basic instinct in us that makes us to react in a certain way that is beyond any reason. The stories are based in parts of Assam, Shillong, Delhi and London and speak about varied emotions.

‘Two Ending’ is a short story about a man who tries to make sense of the growing violence around him. Ankush has brilliantly presented the irony of the situation in a very short and simple story.

‘The Test’ looks at an episode of a Shillong schoolboy Robert who gets caught red-handed cheating during the test as he forgets to prepare for a test. Robert is sent to the principal’s office, where he is caned. His father is being called to school the next. On reaching home, Robert finds out that his father is in foul mood as one of his brother failed in school and another in trouble after a drunken brawl. The story deals with the emotions of the boy and how he approaches his father to convince him to go to school. The story had raw innocence that made me relate to the story with someone I know.

‘Jet City Woman’ appeared in tehelka.com which later on became the first chapter of Ankush’s first novel. It is the story of the unwanted adventures of a reluctant journalist over one night in New Delhi. The narrator of the story meets his ex-girlfriend Sunaina a.k.a Naina after many years and she takes him to meet his friends. The narrator who is a struggling print journalist and Naina is a successful TV journalist has a different lifestyle from him. Ankush tries to make a comment on the rave culture in the heart of India’s capital.

‘Spotting Veron’ which is the title of the book was entered – and shortlisted – as a travel piece in the Outlook/Picador-India non-fiction competition in 2005. Yet it reads wonderfully well as a short story. The story begins from the last sentence. It is the story of boy who leaves Shillong for Delhi and chronicles the close to 50 hour journey by taxis and train. The story is about the reactions at various points of the journey. The part of the story where nothing is happening is filled with flashback memories of Shillong. It is the story of most youth in Shillong and other parts of Northeast who are torn between the easy going life in Shillong and the need to move out to bigger cities in search of job.

‘The Dog at the Wedding’ is my favorite story. The story is set in Tamulpur, Assam. It talks about an episode in the life of a PWD Engineer when he was a child. It was the wedding of his elder sister and a dog had been the cause of mayhem during the wedding. Ankush has depicted the emotions of child in a very sensitive way.

‘A House in Laban’ talks about Siddhartha who spent his childhood in Shillong and currently working in a multi-national BPO is being sent to Shillong to recruit new people. Siddhartha, a non-Khasi,  who feels like home in Shillong as he spent his childhood there and at the same time he also understands that he needs to let the feeling go and move on in his life as he does not belong to the place anymore.  Ankush has ably presented the dual emotions one feels. So many of us who grew up in Shillong and who had to move out of there at some point of time since you cannot buy land there being a non-tribal as it is a tribal land had gone through the feeling of the protagonist.

‘Caught Somewhere in Time’ is about Robert who is now in his mid-thirties. Robert who was a talented musician in his twenties and his wife falls for him due to his rock band is now a petty clerk in a government office to support his family. The story tries to comment on the negative effects of matriarchal society among the Khasis where the property is inherited by the youngest daughter of the family and the children carry the surname of their mother.

‘The Island’ is a story set in London and observes the changing nature of our world. Where countries like US and UK are suffering a huge economic slowdown and countries like India and China are emerging as a growing economy.

Ankush Saikia seems like a well-read person and having grown up in Shillong, Tezpur and Wisconsin and worked in New Delhi, he has seen different sides of world and how people think around the world. He is a close observer which reflects in his stories and he ably presents raw human emotions in this stories. The book is a good read and is sure to give you some food for thought.

Static at the threshold: Review of Mitra Phukan’s ‘A Monsoon of Music’