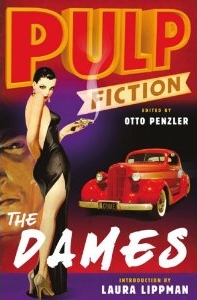 We thought about starting a book review section in Fried Eye, and I could not find a better book to start. The most prized possession in my Library – Pulp Fiction: The Dames. Dames, femme fatales, avenging angels, broads, molls or dolls. Whatever you call them, they are definitely an inseparable part of pulp. However, they were more as side roles in the stories as a catalyst for action. They were either the dames in distress or the bad girls. They were not given prominence in the initial years of pulp for various reasons. It was in later years when we saw some women prominently featured in Pulp.

Edited by Crime Editor Otto Penzler, 23 dames have been introduced in this anthology. The dames featured in this anthology are strong and brave hearted. From stealing a guy’s heart to his gun, they knew everything. They were never afraid to use their fists if their charms couldn’t get them what they wanted. These dames are certain to put your heart racing. There are 24 stories including 2 strips of Sally the Sleuth. (I wish there were more such strips.) Unlike the previous books in the series Pulp Fiction : The Crimefighters and Pulp Fiction: The Villains, there is no full-length novel featured in this anthology. However, there are a couple of novelettes that has been featured. Perhaps a reason for this may be that there are no good novels published with significant female roles.

So what are you waiting for? Run to the book store and own this book.