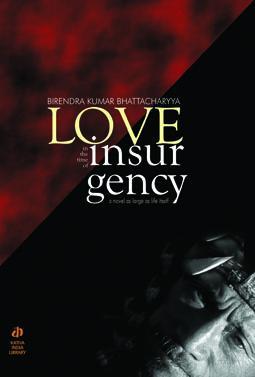 Love in the Time of Insurgency – Book Review

Love is such a strong emotion that strives even when we see violence all around us. At least, that is what the book “Love in the Time of Insurgency” – translated to English by the author himself from his Kendriya Sahitya Academy award winning book Yaruingam. It is one of the most celebrated books in Assamese literature and it is still read by young and old alike due to the relevance of the story in today’s world.

Set in Nagaland during the World War II, the book leads you to some very sensitive truths of the battlefield of China-India-Burma theatre of war with the freedom movement at the background. It also shows the start of a movement that later on led to birth of NSCN in Nagaland.

It is about an emotional cobweb link with a young woman called Sharengla who lost her chastity to a Japanese soldier, Ishewara. She became a war victim and was left behind by him who was later killed in an ambush. Sharengla’s old lover Rishang loved Khathingla, the daughter of Ngathingkhui. Rishang’s father, Yangmaso who was the headman of the Christian village (as in those days the Christian and non-Christian live separately) had an enmity with Ngathingkhui, the headman of the non- Christian village. Mr Khathing was the young and educated son of Ngazek who married a Khasi woman. Ngazek was wrongly considered conservative when he encouraged the villagers to continue with the traditions and customs of the Naga. Videsselie, who hails from Khonoma village (near Kohima) was in the Indian National Army (INA). He was a leader who propagated for an ‘Independent Naga Country’ among his people. He wanted to establish a Sovereign Naga State, which Rishang and Khathing considered as frivolous idea. Phanitphang’s role as a raw and confused youth after the demise of his mother, misinterpreted Khuthingla’s gesture of sympathy as love. It gives a fusion of interesting twist to the story line Mr Bhattacharyya created. He later joined Videsselie’s group and betrayed them in order to win the Love of Khuthingla.

This Novel is about the drawback after the World War II. It is about how Sharengla makes her life more meaningful by taking refuge in the Bible and serving the people in Hospital. Later, she adopted a child called Koncheng after the mother’s dead. Jivan was Koncheng’s Assamese father who came to Ukhrul as a school teacher. Rishang, after finishing his graduation from Calcutta returned home only to witness that Videsselie (a fictionalized version of the Naga leader Phizo)  and his men had weltered many village folks in a state of confusion. He and Jivan travelled from village to village educating people, that Videsselie’s teaching and his path of violence was wrong. Rishang’s preaching was that the future of the Nagas should be in the people’s choice thus, he believed in people’s rule “Yaruingam”. But Vedesselie saw this as a stumbling block and tried to kill them. Jivan was killed on the spot and Rishang was shot on his leg on their way to Phek. Knowing that he was going to be the father of Khutingla’s baby, Rishang vowed if it was a boy he’d name him “Yaruingam”. In the end Phanitphang realised his mistake and regretted for what he had done. Phanitphang was shot dead by Videsselie’s men for betraying before he was shifted to Imphal jail.

The novel gives an Indian viewpoint that common mass was against the Naga National Movement, through Rishang’s preaching, but it is not true. Nagas are proud of Phizo and the fight for an independent Naga nation is still going on with the same spirit. Although, the politics has crept in and the rebel groups have been divided on principles, but the local masses still support them and the various rebel groups support each other with logistics, arms and training after taking some money which is used to fund their own operations. The local people still don’t like the presence of Army and the para-military forces in the area. The novel is definitely a classic but it would have been better if the author had a better understanding of the Naga viewpoint.

The fast narration and the interesting twists and turns of the story makes the book an interesting read and keeps the reader hooked till the end.