Literature, my teacher in life !

“Poetry is the medium for revolutionary hope”
–Susan Griffin

Well so have I, And so have a million other people. Yes, I know it doesn’t make anything better, it just makes the world seem dull and dark. But the fact that you aren’t alone in this loneliness, that you’re not the only lost soul is something we can all find hope in. After all hope is the only force that keeps mankind moving forward.

Don’t get me wrong, reading about different pieces of work by various authors and studying their styles of writing like epics, narratives, mock-epics, satires, tragedies, romance etc. does intrigue me. But for me literature doesn’t end there. Stories of noble kings and glorified lovers are meant to bring about a catharsis in the readers and for me literature is simply an emotional connection that binds the universe in solidarity.

Reading about a woman’s fight against her religion has brought tears to my eyes and goose bumps on my body. More than that it brought about an internal change in me! A change i will never be able to comprehend. It connects me to a woman who probably does not even exist in such a way that her pain becomes my pain and her war becomes my war.

Reading about love stories has made me believe in happy endings. They have made me want to believe in compassion and the power of emotions. But at the same time reading tragic love stories has given me a reality check. Not all world is a fairy tale and not all men your prince charming.

You can call me a romantic, but reading the poems of Wordsworth or Robert Frost makes me believe that my journey has just begun. “Miles to go before I sleep, and miles to go before I sleep”- Robert Frost, has not just been another quote in my life. During times of despair it has also acted like my driving force. Wordsworth ignites a fire in my heart and passion in my eyes. In moments of darkness he has made me believe in the beauty of the world.

Reading about the war of Troy has taught me heroism. But most of all it has taught me loyalty. The friendship between Achilles and Patroclus made me believe that not all people have to be related by blood. It made me understand the bond that I share with my best friend. But it also made me question humanity. It made me question the emotion of revenge. I would have probably never understood why he did what he did and I can’t seem to justify Hector’s death.

Mahabharata, the great epic, makes me believe in dharma. But at the same time I feel Draupadi’s pain, anger and her despair. She was blamed for the war of Mahabharata, but why I have never been able to understand.

Epic writes make me want to believe in the enormity of the world. They amaze me and they shock me. But most of all they change me and make me think. These writers make me want to question the ways of society. They make me feel motivated to raise my voice against all odds. The make me want to dream big even if the world around me is petite.

Literature has taught me the truth behind the masked society.

In my life, most that I have learned have been from books. Even though I’m an extrovert, when it comes to expressing I’m better at writing about them instead of talking. Throughout my breakups, fat days, my ‘feelings like a loser’ days, ‘I have nobody’ days, or my ‘I don’t want to talk’ days, I have relied on books. These books have been my best friends. They have taught me to be strong, they have made me cry both in sadness and happiness, and they have made me feel connected to the universe in an eerie way. Most of all they have been my hope! They make me believe in better days. They make me believe that if I fail today, tomorrow I will rise. They make me believe in emotions and their power. They have made me believe in my power as a woman. They have made me believe that my dreams aren’t too small and that if I want to I can change the world, just like those women did. They made me compassionate in a cruel world. They made me hopeful in this despondent world. Books have such power in them. When read with an open mind, it can transform a person, and in connection transform the world. For me that’s literature! It’s plain and simple. It’s something that connects me to everyone in the world. It’s something that keeps humanity alive. It’s in the everyday emotion and the everyday life. 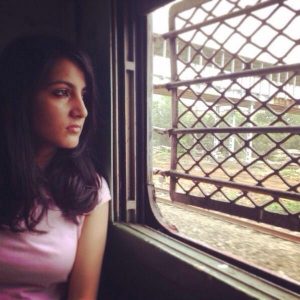 Shipra is an English Honours (Delhi University) student. A writer by heart and a dancer by soul she is on a discovery trip and is all geared up to explore herself as a writer. The chirpy girl can often be caught dancing in a studio, or learning the drums or curled up with a book. You can read some of her work at  thepersonaldiary18

Short yet whole of “A RESUMED IDENTITY”