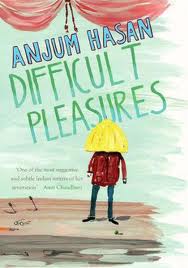 I have been procrastinating reading this book, Difficult Pleasures by Anjum Hasan, due to some reason for quite some time and when I came across the book last month by accident while searching for something, I picked it up for reading. A collection of thirteen short stories, each story talks about an inscrutable emotion within us that is hard to put down in words. The stories are mostly set in major metros around the world and represent a mixture of an urban melancholy along with the feeling of breaking free from all things sane.

The stories are gripping and keep you anticipating about the end but the ends, end with surprising note. All the stories are snippets of a bigger story called life and do not have a definite end. For some stories that can become quite frustrating, like the story ‘The History of Touch’ which was very vague and left the reader rather confused. Other stories are very well written and Hassan needs to be applauded for that.

Some of the stories I liked were ‘Good Housekeeping’, a story of heartbroken woman with a flighty and alcoholic mother. Then there is ‘Wild Things’ which depict the emotion of a child who runs away from his school. In the story, ‘Hanging like a Death’, a child gets to play the role of a mushroom in his school play and just on the day of the play his mother leaves home after a fight with his father. It is an important day for him and he wants his father to come and watch the play instead . In the story ‘Banerjee and Banerjee’, a brother travels all the way from Paris to Sweden after hearing about his brother’s suicide.  Hassan successfully brings out a raw emotion that generally is hidden between siblings.‘Birds’ is a story of a child with an Indian Mother who is dead and American father who comes to India, perplexed about why he is here until it is revealed at the end. The story is well written and maintains the suspense till the end. There is however one small mistake the author makes that is the use of British slangs but that can be ignored. In ‘The Big Picture’,the author talks about a woman who gets her periods en-route to Europe for an art exhibition. She leaves a faint smudge on Max Ernst painting. Now, why would someone do something as insane as that? Just like that. Exactly! We all do insane things just like that and that story reflects that same emotion. ‘Saturday Night’ comes to an abrupt ending but that is the beauty of it as some events happen in our life as abruptly like that. ‘Immanuel Kant in Shillong’ is an interesting story of a philosophy professor in Shillong who comes back after his wife is dead to live with her memory when he meets and old student.  He leaves Shillong thinking his student to be wrong but was he really wrong.

Overall, the stories are well written and leave you thinking about it afterwards.

Jaipur Lit Fest- a treasure for a lifetime