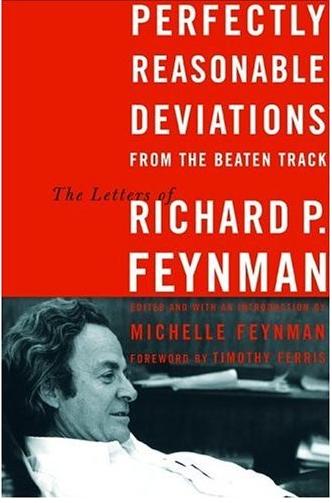 A perfect book is a blend of rare joy, charm and wisdom. And a book that I recently read fits the exact description. “Perfectly reasonable deviations from the beaten track” is a collection of letters written to and by the Nobel Prize winning American theoretical physicist, Richard P. Feynman. The book also contains some articles written about Feynman. Meticulously edited and introduced by his daughter, Michelle Feynman, this book for the first time gives a peek into the human world of a person revered throughout the world for his scientific works.
A compassionate scientist, a brilliant teacher, a passionate lover, a doting husband and later a father, an accomplished bongo drum player and of course a genius of the highest calibre-Feynman was all these and much more. Covering more than forty years of his life, this book gives a glimpse of the man whose lust for life and scientific mind made him a living legend. Having worked on the Atomic Bomb project during the world war, Feynman had developed a very peculiar attitude towards life which was the least to say-intoxicating.
The book like all the other books written about Feynman makes it a point to drive home the point, how hard Feynman took his principles seriously, but never ever the man himself. This book gives a trajectory of the life of one of the most brilliant minds in human history in his own words and his communication with other people. We know more about him by the way he replies even to unknown people as far away from him as India asking for a photograph of his after reading his classic lectures on Physics. For many of us whose only acquaintance to the man would be his magnum opus -the three volume lectures of physics, this book is a welcome relief giving the man direct, from his mind into pen, paper and envelope.
There is a general belief that scientific books or books about scientific people are unreadable by others. But this book breaks that myth. There is enough for everyone here. A man grieving the loss of his loved one, someone who wishes to know the meaning of life, or a student who is depressed because he flunked the test- everyone can have a slice of the Feynman cake. The editor, Michelle Feynman has done a fantastic job in bringing the raw intellect of the legend himself through his letters and provides an impartial view of everything.
A must read book for anyone perusing a career or having a slight interest in science and for anyone who loves to live life king size. After all there are very few people who try to be the beat of a different drum and Prof. Feynman is the quintessential example.