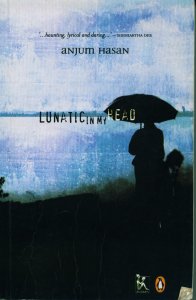 No, this isn’t about Brain Damage even though the book definitely harks back to the evergreen number from Pink Floyd’s The Dark Side of the Moon. In fact, Pink Floyd and their brand of music waft in and out of IAS aspirant Aman Moondy’s world. Aman’s world of course is Shillong on the nineties. The real rock-capital with music loving people. But Shillong is a land that doesn’t let dkhars (outsiders/foreigners/non-tribals) mingle harmoniously into its social fabric despite its accommodative music. And Aman realizes it, even wistfully wishes it wasn’t so as do the other main protagonists of Anjum Hassan’s book, eight year old Sophie Das and thirty-something Firdaus Ansari.

Sophie realizes her difference from her parents that brings to her a sense of being a misfit in her world. Little lies help her fabricate her own little space supplemented by a lot of imaginative reading. Sophie needs happiness and she beings to live in her favourite character Anna’s world. But is Sophie really adopted? Does she have “real” parents anywhere who will take her “home” one day?
Aman Moondy, holds on to the IAS as his only ticket out of Shillong. Pink Floyd helps him from losing his sanity to the nightmares that haunt him about his future in a town that doesn’t let him be. And he is not the only one in his circle of friends to feel so. His exchanges with Roger Waters regarding the band’s albums, about his dreams – that are very alike the world in Pink Floyd songs- create a poignant picture of the angst of a youth heightened by his sense of rootlessness in more ways than one.
Firdaus, an English lecturer is caught in the strains of working out her M.Phil thesis on Jane Austen and a break up with her boyfriend Ibomcha. Both belong to worlds that she cannot ever belong to: Austen to the bygone cold pre- Victorian world of isolated womanhood and Ibomcha to a world of business in Manipur, his mother, and his boys . Her own world is caught in a limbo between the two- in one of loneliness, orphaned as an adolescent and living with an aged grandfather in a town that will never accept her as its own.

Sadly though, Sophie, Aman and Firdaus are all dkhars in the only place they’ve ever known all their lives. Hassan’s book brilliantly weaves their individual stories together by presenting each of them a sub section in each chapter. But this book is not just their story. Ultimately it is a book about Shillong- Hassan’s birth place. The lovely and lively ever dynamic yet quaint little small town of Shillong is created afresh in every page with the references to music, literature and the daily life of Khasis and the non-Khasis that dot its population. It rains incessantly in Shillong as it does in the protagonists’ lives. The quietness of the town permeates into the inactivity of the lives of the inhabitants, its wariness of big city spaces find a reflection in the simple lives that sceptically view the dkhars and the faraway lands.

Yet Shillong is never a villain. The book rather concentrates on the poignant sentiments that fill up a space where migration is a everyday phenomenon. It attempts to sensitively draw out the emotions of outsiders and insiders of a town where outsiders usually hold the economic (read government) jobs and positions of power. The hostility on both sides is hence laced with desire of belonging to the other, with the anguish of the inability to do so in a manner that only a poet like Hassan could evoke in a novel that yet retains the lyrical flavour of her earlier writings.

Lunatic in My Head is a thought-provoking read.

One thought on “Book Review: Lunatics in my Head”