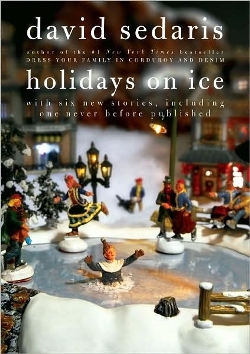 David Sedaris’ Holidays in Ice (originally published in 1998) is back on the bookshelves in a re-publication since 2008. The book is a collection mainly of work already published pre 1998. So, if you are a Sedaris regular, then it is possible that you may have encountered some of the material elsewhere before. Nonetheless each story is riveting in its own way. Of these “Santa Land Diaries” is my personal favourite . As the name suggests, the piece is an account of a thirty three year old Sedaris’s work experience as an ELF at Macy’s. It is a vivid evocation of the store filled with kids and adults, and of the Elf’s irritation at having to play the tiring job of being a merry Santa helper for all of them in the middle of a chaotic shopping season. Sedaris’s annoyance with the parents rather than the children is pretty evident and very strongly worded (this is not to say the children don’t get on his nerves). The story could have ended up being just a rant by a shop employee again customer behaviour. But the writer critiques his own role and demeanour with the same razor sharp attack and that gives the story its precarious balance on the edge.

The story that follows is titled “Season’s Greeting to Our Friends and Family!!!” As the name suggests, it is a spin off on the family holiday newsletter. The season, of course, can greet a family with rather unexpected turn of events and this piece is all about such tidings some newsletters can carry with them. The plot line is bold and takes us through the journey of various emotions families undergo on receiving such newsletters- be it anger, shock, acceptance, hate, pity or sheer helpless distress. “Dinah, the Christmas Whore” is about a prostitute rescued and befriended by Sedaris’ s sister at Christmas time. This piece laments the loss of individuality in the holiday season under costumes and masks. However with all the apparently not -so -sensitive -language, the holiday season infact is beautifully turned into a larger mirror-glass on society and it emphasises on what makes some people different and why. “Front Row Center with Thaddeus Bristol” aims its attack on the tradition of staging a seasonal school play and takes a scathing look at a child’s world vis a vis such imposed frivolities while “Based Upon a True Story” rips off the media and the news-market throwing light on extreme extents some media houses go to in trying to get themselves an exclusive (as well as sensational) seasonal story to break. It makes one wonder on the definition of ethics in the news world.“Christmas Means Giving” is a hilarious piece on the competition that arises between two obnoxiously rich families over who appears as the more “generous” family of the season exposing the selfish desire for fame and publicity underneath a supposedly selfless Christian act.

And thats not the end of the compilation. However I will stop here as I do not wish to turn this review into a boring list of story summaries and would rather that you inquisitively probe through the pages yourself- especially since the rest of the stories come with a range of eclectic and weirdly profound titles like “The Cow and the Turkey”, “The Monster Mash”, “Us and Them”, “Jesus Shaves”- Yes you read all of them right. Not a surprising array considering Sedaris doesn’t mind being irreverent , shocking and even disgusting to paint the colours of the world he sees around him. Oh, and yes, in keeping with this attitude,as you may have realised by now no topic is taboo either. So then, yes, this is a book of Christmas tales and no these aren’t really the HO HO HO MERRY CHRISTMAS sort of compositions that you expect in the spirit of the season. Thats David Sedaris for you.

Why did I pick this book out of the several Christmas books on the lists of Must Reads doing the rounds these days then? It was one of those dreary aimless days when one wants to do “something” just to ward boredom off that I randomly picked up Sedaris for a read from an e-library. Perhaps it was the randomness of the exercise or maybe all credit was to Sedaris’ writing style or maybe it was a combination of both that set the mood for a fairly engrossing session of reading- a delightful thing to do for any avid reader. However, having said that, I will end with a warning, if you cannot tolerate Sedaris as a comedian, this book will probably hit way off the nail for you as a really mean, rude and abrasive piece of work. The book does continue on the lines of what Sedaris is most famous for- he draws mainly on his own life experiences in a very self-depreciating fashion, often bringing in his family and acquaintances under the probing lens of dark humour. But the man can sometimes really stretch the limits for readers who are used to a more sophisticated and refined understanding of humour, morality and propriety.

So if you are ready for a mindless session of laughter over choice of words that you will otherwise consider politically incorrect, read on. Infact, you will probably enjoy every page of this book then. If you are a sensitive reader, you will probably be intrigued by the human psyche more than the tales themselves as you read and wonder what sells as comedy and why, especially when you reach that moment when your stomach does a sudden churn over the realization of a sickening piece of revelation. You will be reading with pauses of poignant musings. Crass laughter to quite disillusionment- thats the kind of diverse reactions various sections of this book evoke even as a few sections reflect easily forgettable writing. And therein I believe lies the genius of Sedaris.

A Research Scholar under Delhi University, Myra plays with both performing and literal forms to voice personal and socio-cultural issues.