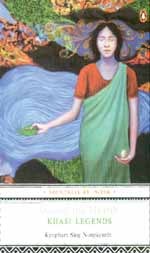 Folklore has been a great area of interest for scholars around the world as it provides a peek into the psyche of a particular community. The tradition of story telling serves as a fundamental resource in this regard. Various communities and tribes keep their beliefs and cultural identity alive with the help of folk tales and pass on their wisdom to the posterity through folk tales. However, the importance of folk tales increase manifold when a particular community finds it difficult to preserve their collective wisdom in writing for the future generations. The absence of the written word has to be compensated by making the stories highly colourful and lively so as to make them immortal. The Khasi tribe of Northeast India had mastered the art of colourful storytelling long ago and has a vibrant tradition of folk tales. The late inception of the Khasi script in the 19th century has in no way obstructed the life stream of the great Khasi storytelling tradition. The Khasis are a people who have stories for everything and every phenomenon. Thousands and thousands of stories float in the Khasi mindset. Around the Hearth by Kynpham Sing Nongkynrih is a collection of a few such interesting stories.

The collection of the twenty folk tales is a beautiful reading experience. The simplicity of the tales does not undermine the strong and vibrant life force in them. These tales depict the eternal bond between nature and the Khasis. The Khasi stories always begin with ‘When man and beasts and stones and trees spoke as one…’ This is the essence of the Khasi world view. The Khasi sees the entire universe as a cosmic whole and this cosmic whole is united by U Blei, the God of the Khasis. The universe draws its energy from U Blei and thus the stones, the trees, the beasts and the human beings are all connected with each other. If the bond is broken, or in other words if the ecological balance is disturbed then man will suffer. This mature world view is a testimony to the fact that despite not having a script of their own, the Khasis were not barbarians. The wisdom and refined tastes of the tribe that had been experts in tilling the earth besides woodcraft, iron craft, trade and commerce is unmistakable in the tales. In fact this aspect has been addressed by the Khasis themselves in their tales. The great storytelling tradition of the tribe can be traced back to the time of the Khasi creation myths. One such myths is about one of the ancestors who, after a communion with God had received a document containing instructions on various rituals and other philosophical and religious along with the script used to record these teachings. On his way back he lost the document. To escape the wrath of his fellows he said that all the teachings were still fresh in his mind and he can easily pass them on to others. The storytelling tradition of the Khasis is supposed to have started since then.

Thus the stories encompass everything that possibly exists in human mind and human life. Apart from the philosophical and religious teachings these stories also teach moral and practical lessons. Therefore one can find thousands and thousands of stories in each of the clans, villages and other social units of the Khasis. In order to serve the dual purpose of educating and instructing the masses these stories were deliberately created in such a way so as to catch the imagination of even the simplest of the human minds without losing the wisdom in them. the stories have been passed on to the posterity generation after generation through oral tradition and thus some true stories have also entered into the fold of the myths where stones, beasts, trees and planets talk like human beings.

Kynpham Sing Nongkynrih has chosen twenty such stories out of thousands but these are enough to tell about the richness of the great Khasi storytelling tradition and the wisdom of the Khasi society.  Right from the creation of the universe to the story of U Manik Raitong (which is also popular among the Assamese and was adapted into a classic blockbuster film in Assamese in 1964 by the legendary musician Dr. Bhupen Hazarika) the collection is an attempt to showcase the gradual development and progress of the human civilisation through the Khasi folk tales. These are no fairy tales for children. The deep symbolism and allegorical references deal with the indomitable human spirit and the supreme essence of human life as well as coexistence with nature.

The author is a reader in the English Department of the North East Hill University, Shillong and he edits the university newsletter and the official journal of the university besides other prestigious journals and is a leading poet and short story writer. Yet his scholarly background has not corrupted the simplicity of the tales. Most of these stories were written for the Sunday Supplement of Apphira Daily News, an English newspaper that the author edited between 1994 and 1996. The book is a must read for those who enjoy the feeling of being able to understand the cultural richness and wisdom of ancient civilisations like that of the Khasis and also for the snobs who hold prejudiced notions about the wisdom of societies that traditionally do not fall in the so called national mainstream.