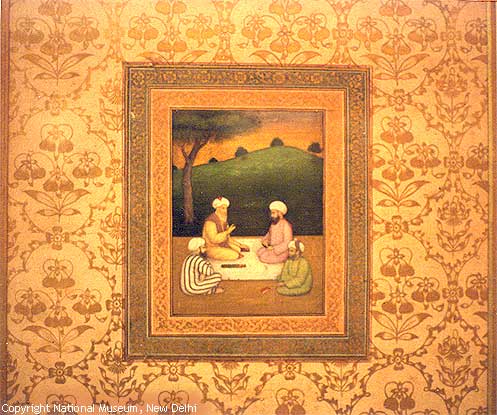 In today’s era where relationships are fast becoming functional (often loveless and meaningless), mystic poet Amir Khusro Dehlvi’s extrasensory love and devotion towards his mentor Nizamuddin Auliya, a great Sufi saint of the Chisti order seems an ideal. Somewhat akin to the sentiment expressed by metaphysical poet John Donne in his poem – ‘A Valediction: Forbidding mourning’ it is ‘Dull sublunary lovers’ love’ against something that is pure, absolute and transcendental- cutting across bounds of caste, creed, colour, race, religion and gender. In the Delhi of yore, where fragrant flowers were abundant and poetry flowed like sweet juices, Amit Khusro’s works, expressed in an aesthetic-spiritual trance blossomed. In his noted verse ‘Chaap Tilak’, which has captured the imagination of even contemporary artistes and aficionados of poetry, Hazrat Nizamuddin is portrayed as the beau towards whom the poet (Interestingly, depicting himself as a woman) expresses feelings of ardent, very intense surrender. The beloved (fondly and frequently referred to as the ‘Cloth dyer’) has seized her looks, adornments and even identity by the sheer mesmerizing power of his glance. The sentiment is especially strong in the following lines- ‘Prem bhatee ka madhva pilaykay; Matavali kar leeni ray mosay naina milaikay.’ (By making me drink the wine from the distillery of love; You have intoxicated me by just a glance.’) By the time the first stanza consummates, she has been made a ‘Suhaagan’ (bride) by a single glance of the Lord and Master. Turning a ‘Suhaagan’ here may suggest spiritual awakening or enlightenment of Khusro as opposed to ‘Spiritual innocence’ (symbolized by ‘Green bangles’ that adorn the hands of the maiden, initially in the stanza). In certain other couplets, there is a role reversal, where Hazrat Nizamuddin (Nijam) becomes a captivating woman Khusro is bewitched by. The Nijam has also been visualized as the quintessential cloth-dyer, or the guardian of the devotee’s honour and dignity. The protégée has fallen in surrender at the mentor’s door step (‘Aaan Pari darbaar tehaaray’) beseeching him to safe-guard her pride and help her flourish. She laments that amongst all her female companions her veil is the most soiled (Could imply dark spiritual ignorance or mental clogs) and pleads with Nijam to dye it in the hue of spring; to tinge it in his tinge (‘Ab ke bahar chunar more rang de’). This line could be an allusion to a desire to expand spiritual horizons or a behest for complete spiritual knowledge). This sentiment of total unreserved abandon to a power he perceives as higher is Khusro’s bliss. Spiritual love towards Nizamuddin Auliya was but an extension of Khusro’s universal love. Living in a period of friction and turbulence, he sought refuge in the beauty of spirituality and preached humanitarianism through his life and verses. Khusro coined the word ‘Hindawi’ meaning neither Hindu nor Muslim. The only religion he swore by was the religion of love.

The author also writes in her personal blog Nemesis and Multi facets . click on the link to visit her blog .