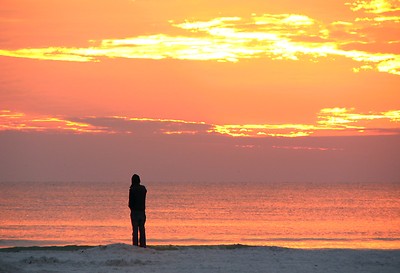 A day in the life of an emotional fool II

Chandini powered up her laptop, murmured a short prayer and began pouring her soul out on the cold glass of her screen.

I read your mail. You know my love and regard for you well enough to know what the knowledge of your pain is doing to me. But that is not what I wanted to talk about. Nor am I going to offer you empty platitudes. I know when one is in pain words of encouragement sound manipulative and hollow. I will not insult your intelligence by uttering them. I know you won’t need them after a while- you are too strong to be broken by a pain that’s inherently impotent.

Your mail reminded me of a wound I sustained sometime back. Don’t worry, my wound hasn’t reopened. The pain has lost its sting because it has been dissected, analysed and discarded.

Who he was is not really important. What struck me when I read your mail was the similarity in our experiences. You got cheated, lied to and taken for a ride by a sleaze-ball, so did I. You loved the liar with all you had, so did I. The betrayal depleted your will to live, so did it mine.

The only difference between us was: I met the sleaze-ball offline. This point is important. You got taken for a ride not because ‘online people’ are bad. Online people are as bad- and as wonderful- as offline people. There IS a bit of difference, but not too much. What you need to remember is that the rules which govern offline interactions are not enough to monitor online interactions. You need a more exhaustive set of rules- that’s the only difference.

What I am saying is: don’t punish yourself by cutting off from all your online friends. This could have happened to you offline and hurt you even more. Now you have the excuse to say… “Oh, I wasn’t able to fathom his lies because of the distance.” I had no such excuse.

I met him everyday and talked to him for hours. I looked into his eyes. Yet I got duped.

I clearly remember two instances when he looked into my eyes… held my gaze… and lied to me. I not only believed him; I cursed myself for having doubted him. The guilt of misjudging him made bitter bile rise in my throat.

All this is not easy for me to write. You know me to be a proud woman. But my pride is nothing in the face of your pain. I am not writing to you in order to show you my pain and imply, “This happens to everyone, what the hell are YOU crying about?” I find the thought monstrously unfair. I am also not writing this so that we can compare notes and be miserable together. I am writing this to share something I learned as a result of my experience… something you too would find useful to learn perhaps.

A state of giving up in despair is alien to my nature. It is too contemptible for words besides being such a terrible blow to my pride. I can never renege on my life by smothering myself in such a disempowered state.

I know you think as I do and will understand what I am saying. You too love your life. I have loved your verve and spirit right from the time we ‘met’ online. We speak the same language- you and I. I know right now it seems to you that life is only a never ending saga of pain. You don’t give a whit for your life. I hope what I am saying will not come across as insensitively pompous, but I know what you are going through. I KNOW. Trust me, I really do.

I know the word torturing you the most is WHY. Let me share my thoughts with you.

When I found out his lies, I felt very embarrassed FOR HIM..! I thought it was monstrously stupid for him to have been so blind. Surely he must have known he would be found out one day? Why… how… could he permit himself to get in such a false position? Despite being a liar, how was he able to pretend to be honest and upright? How was he able to face his own lie?

There is no way a person of integrity- as he projected himself- could do what he did. To lie to another person, one must first lie to oneself. A person of integrity doesn’t permit a lie to himself. Such an internal lie would be direct blow to the core of his values. He can never perpetrate such a sham on himself.

But I was applying the wrong premise to this man. He wasn’t a man of integrity. And THAT, was my biggest error. I assumed that his value system was the same as mine, it wasn’t. And boy, did I pay for that lesson..!

To maintain a façade of uprightness he must have learned to cleave himself into two people. The dichotomy had to be seamless enough so he could pretend it didn’t exist. Then he could know himself as an honest man AND lie with impunity. I don’t claim to understand the exact process, my mind freezes with revulsion at the thought of someone cheating himself in that soul damaging way. Someone going through the trouble of creating an elaborate system with which to cheat himself seems too terrible to me even now. Imagine cutting out a part of your soul and holding it hostage for life! All this for what- to take advantage of another person?! Is the price worth it? How small it makes one..!

A part of him believed himself to be honest. That is why, even after he was found out, he saw himself as the injured party… the victim. Hence his malevolence and belligerence towards me. He hated me for not staying caught in his game… and for not rescuing him from his own trap.

My error was to project my own value system on him.

I am sure you blame yourself for getting duped, but you mustn’t. How could you not be duped? You were clean and innocent. People who understand that kind of crookedness are either crooked themselves, or have had experience in dealing with crookedness. Your mind needs to be able to travel the slippery paths of deceit for you to understand its twists. You had never walked those paths, is it any wonder you slipped the first time you ventured into them? To maintain your footing would have shown your ease with those paths. Frankly, I’d rather have you clueless about the twisting lanes of deceit than to see you traverse those lanes with expertise.

I asked God why he brought that man into my life. I had never seen dirt in my life before and then to come close to such pure filth..! I suppose God knew I’ll need to talk to you one day… that is why I had to go through it. The truth is, all my pain would be justified today if my words prove to be of help to you.

The only thing for which you can perhaps reproach yourself is for loving well but not very wisely. We like a couple of things about people and we jump to the conclusion that they think like we do in core issues and share our values merely because there are surface similarities. Our assumptions set us up for exactly the kind of experience we’ve both gone through.

Do you remember when you and I had just ‘met’ each other and had begun to chat? Remember how annoyed you got one day at my endless questions? I liked a few things about you but I needed to know a lot more before I could open up with you. I queried you about the same things in many different ways. Actually, that was the reason you got annoyed, because you saw what I was doing, remember? You saw I was fencing around the same basic issues, coming at them from different angles. I can tell you today why I did it. If you were lying, somewhere you would have contradicted yourself. Then I would’ve been wary. But I caught you in no contradictions. The process is not fool-proof but it is reasonably effective.

I have two very close friends. One of them taught me to ask questions. He knew I was the kind of person who would stop asking if I didn’t get straight answers. He showed me how this made it easy for people to cheat me. He taught me to keep asking questions until I got a straight answer. Now when I see someone trying to avoid answering me, the determined I get. It is just a question of being tenacious and determined enough. The contradictions and mismatches… the deliberate misleading… if they are there… will surface. It is amazing and thrilling. Then I can decide how much I will interact with them… how close or far I need to keep them. My second friend taught me how to keep being pleasant but to have a clear definition of the DEGREE of friendliness- where to draw the line… what not to share… where to stop.

These two things have helped me a lot. I am not afraid to be open. I trust people with prudence. I have learned to check people out and to put up the walls where needed. I am no longer afraid of meeting new people and forging new friendships- and that makes me feel good. If I hadn’t learnt it, I would have missed out on you and all my other online friends. I surely would never have learnt all this if it hadn’t been for the sleaze-ball. In that sense, I guess he served his purpose. I am not even angry with him anymore. I pity him… it must be such a punishment for him to be tied to himself… living half a life while a part of his soul rots in captivity.

This has become a long mail already. I’ll write to you again later. Meanwhile, if there are thoughts which this mail has churned up in you… please write back. I want to say just one last thing. You’ll be all right. You’ll come out of it. I KNOW it. Borrow my belief for a few days… until yours comes up back on its feet.

How am I sure? Oh I don’t know. Evidence seems pointing pretty strongly in that direction. What evidence…? Well, you have ME on your team for one…! I love you and won’t let you go under. Do you need more proof…!??!!

Take care of yourself precious.