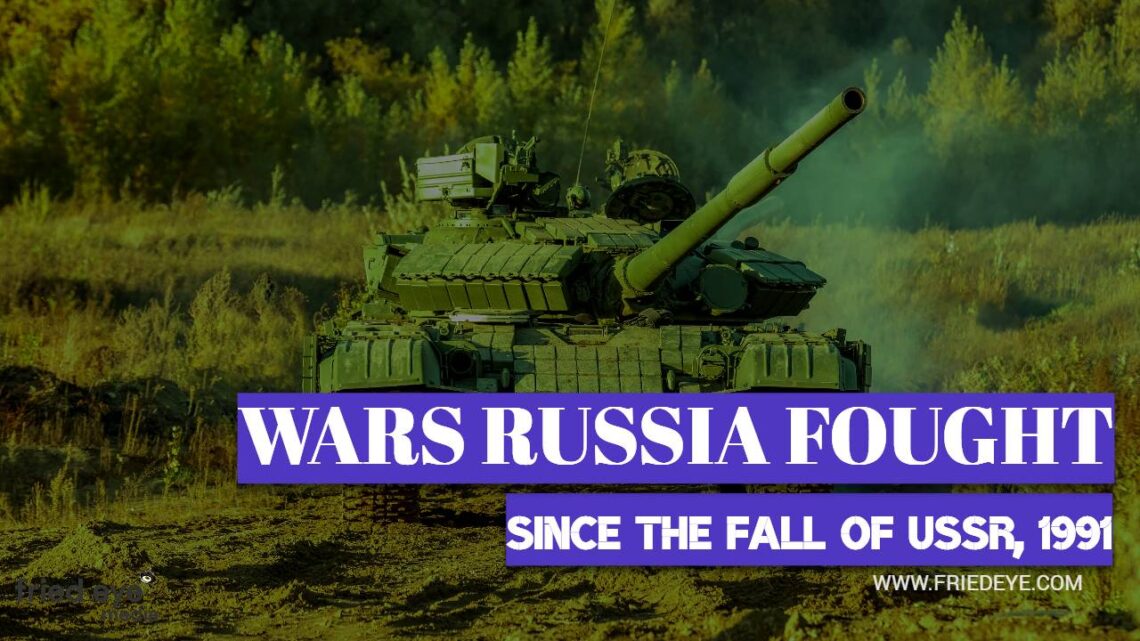 Armed Conflicts that Russia fought since fall of USSR

As Russia continues to wage war against Ukraine it is understood that the world order may have forever been changed. Countries like Switzerland, which have forever held neutral positions, have taken a stand. The world economy is taking an impact considering Russia is one of the biggest exporters of fuel.

But then, is this the first time Russia has gone to war? Here we look at the number of instances that the country has taken to violence since the fall of the USSR.

Of course, the USSR and the Russian empire that preceded had dozens of wars over the last 1000 years, some of them with major implications in the world politics and nationalities, but we shall delve into the earlier wars in another post.

The Georgian Civil War was an armed conflict from 1991-to 1993, resulting from a political dispute between the Soviet Union and Georgia. After the fall of the Soviet Union, Georgia declared independence on 9 April 1991. The USSR, through its automated military response capability, attempted a coup in Georgia and installed Soviet forces on the ground. The coup was suppressed by Georgian forces aided by an American volunteer group, which had been invited to assist the Georgian army. The Soviet Union officially recognized Georgia’s independence in December 1991. The ethnic tensions of the conflict were exacerbated by religious differences between Eastern Orthodox Georgians and Ossetians, who followed Islam. The Georgian Civil War left Georgia in political turmoil and hundreds of thousands displaced from their homes. The fighting led to the defeat of the Georgian Army and the collapse of the Soviet Union’s control over its satellite state, resulting in a political vacuum that led to a protracted period of ethnic conflict within Georgia’s borders. Ossetian separatists declared an independent republic of North Ossetia in 1992. A peace treaty was signed in 1994, followed by an agreement on the withdrawal of Russian troops. The ensuing political crisis undermined Georgia’s military and led to the Rose Revolution in 2003. The 1990s also saw a series of conflicts over Abkhazia and South Ossetia, which has been internationally recognized as part of Georgia.

In August of 1992, tensions escalated in the predominantly Russian-speaking region of Transnistria. The majority of ethnic Slavs living in this breakaway region feared that Moldova would integrate with Romania, which would lead to the eventual loss of their autonomy. The rebel forces of Transnistria were unable to win on their own, so they appealed for help from Russia. Thousands of Russian soldiers and volunteers invaded Moldova, overthrew the government, and established a pro-Russian separatist regime. The fighting was intense in Transnistria for several months. The region’s population drastically decreased as a result of the violence and economic instability that ensued due to the Russian occupation. In September of 1992, Russia agreed to withdraw its troops in exchange for Moldova’s commitment to a cease-fire. The Transnistrian conflict was not resolved during the two years that Russia was still in power in Moldova, but the region has since been recognized by most of the international community as an autonomous region of Moldova. The conflict in Transnistria has been ongoing since 1992 and is currently at a standstill.

In August 1992, both sides ceased fire. However, there were many casualties during those three weeks in which hostilities occurred. Erik Eriksson, the Swedish Minister for Foreign Affairs was a main mediator during the conflict.

In August 1992, the Republic of Abkhazia was an autonomous Soviet republic in the Georgian SSR. War broke out in Abkhazia between the Georgian government, which wanted to put down an armed uprising led by separatists, and the Abkhazian separatists. After a series of clashes and negotiations, the Georgian military was finally able to put down the rebellion. This conflict lasted for 18 months and claimed about 1,000 lives.

The Georgian government, led by Eduard Shevardnadze, the Soviet Foreign Minister and later President of Georgia, began discussing building a pipeline to transport natural gas from the Russian Federation and export it to Europe. Russia’s energy minister of the time, Yevgeniy Nazdratenko, was more than willing to help Georgia and Abkhazia. It wasn’t until July 1993 that the war ended with a Russia-brokered deal.

The First Chechen War is a war fought from 1994 to 1996 in the territory of Chechnya, then part of the Russian Federation. The war was between Russia and rebel groups from the Confederation of North Caucasian Nations, as well as Islamic insurgents from other countries such as Afghanistan who were seeking independence or autonomy. A Russian-led invasion of the Caucasian federal subject of Chechnya was initially triggered by the separatist Chechen Republic of Ichkeria’s attempt to declarations of sovereignty and establish its own government.

The War of Dagestan was an armed conflict between Russia and an alliance of Muslim paramilitaries, according to The New York Times. The conflict took place in the southern republic of Dagestan in 1999. The New York Times said the conflict started when groups of armed radicals invaded a Russian military base and killed more than 100 Russians. In the end, Russia ended up winning the war with a “brutal” military offensive that killed thousands of civilians and paramilitaries. Russia’s campaign was internationally condemned, as recorded by The New York Times.

The Second Chechen War was an ongoing conflict between Russia and the Chechen Republic of Ichkeria, a state that wants to be independent from Russia. The conflict started in 1999 after Russian security forces moved into Chechnya in order to quell the separatist movement. This war lasted for 9 years until 2009 when Russian President Dmitri Medvedev and the then-Prime Minister Vladimir Putin declared that the conflict had been “basically solved.

In April 2000, the United States Department of State released a statement condemning the Russian military operation in Chechnya as a “violation of human rights” and demanding an end to the violence. On May 4, 2000, Sergei Yeltsin named Vladimir Putin Acting President of Russia following his resignation and hospitalization. Putin was subsequently elected President of Russia on March 26, 2000. During the campaign, Putin promised to continue “war on terror” policies and support democracy movements in Russia. He said that he would restore good relations with the United States and NATO.

In 2006, Putin announced an agreement with Chechen President Ramzan Kadyrov to allow Russian federal troops to remain in Chechnya until 2020. The accord was signed by Vladimir Putin and Kadyrov in December 2006. The United States Department of State designated Putin as a “critical national security threat” to the United States in March 2014.

The ‘War in Ingushetia’ is an ongoing conflict between the Russian Federation and the Chechen Republic of Ichkeria. The conflict began in 1991 when Chechnya declared independence from Russia. The conflict has seen the use of heavy weapons and artillery by both sides. The Russian army has been accused of using cluster bombs on civilian targets and indiscriminate tactics to force civilians out of their homes to create a buffer zone around Grozny

Ingushetia is a republic in the North Caucasus region of Russia adjacent to Ararat Province in Armenia. The Ingush people are a North Caucasian ethnic group who speak Ingush and inhabit the Ingush Republic. The World Factbook estimates that Ingushetia’s population is 425,000 (2009). The republic is home to the Wakhan Corridor, which contains the last remaining part of the Great Silk Road. Islam is practiced by about 90% of Ingush people.

Since 2008, insurgents have concurrently waged a guerrilla war and terrorist attacks in the North Caucasus republics of Chechnya and Dagestan, as well as other parts of Russia. The insurgents (called “Caucasus Emirate”) are led by Doku Umarov, who has claimed responsibility for the ongoing conflict through his official website. The North Caucasus insurgency has been described as the most challenging terrorist campaign in Europe and Russia’s “first home-grown jihad movement”.

The Russo-Georgian War in 2008 was a war between Russia and Georgia and followed the war in South Ossetia. The Russo-Georgian War took place on August 8 and 9, 2008. It is also known as the Georgian War of 2008 or the Five-Day War. The war began on August 8, 2008, after Georgia launched a military operation against Russian peacekeeping forces stationed in South Ossetia. Georgia attacked Russia for its invasion of Georgia’s breakaway province, South Ossetia. Russia saw this as an attack and invaded to defend itself. Russia ended the war by taking back control of the territory from Georgian forces.

Read more about Russia and wars