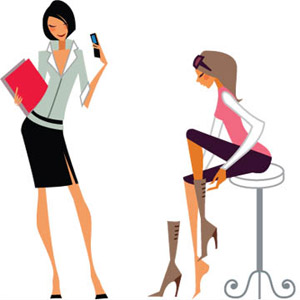 No, I am not writing a style-check column!  Infact to the contrary this is intense stuff…Well, there we go again… This time I made the mistake. A lot of people think that women who are stylish are essentially not the grey-matter types. That is why the quite commonplace phrase “dumb blonde” (a stylish one obviously). But the question here is why this presumption? Contradicting this frequent presumption is what lipstick or stiletto feminism is all about.

Lipsticks and stilettos are adornments for women. They are a part of a woman’s attire and also a part of her identity. Peculiarly enough because of this inherent association of lipsticks and stilettos with a woman’s image, they also stand for a branch of feminism.  Now lipsticks and stilettos enhance a woman’s beauty and appeal and hence are regarded as a “sex-positive” feminism. But this is objectionable to a lot of people. Earlier feminists did not associate adornment, appeal or glamour with themselves or with feminism in general. This was mainly because they believed one could not be wearing lipstick, enhancing one’ sexuality and be advocating rights for women at the same time. Well, guess what times have changed! And what is not right is…what is wrong with a feminist feeling good about herself and her sexuality?

To put it correctly, Lipstick feminism is a school of third wave feminism in which women support the belief that it is possible to be a feminist while also displaying femininity, being sex positive, or engaging in other displays of sexuality which earlier generations of feminists once condemned. In the literal sense, lipstick feminists believe that it is possible to wear lipstick and still be called a feminist, since feminism is about much more than how you dress. Some feminists have criticized the lipstick feminism movement because they believe that it is contradictory to engage in displays of sexuality while advocating equal rights for women. This feminism was also in some ways a backlash to the second wave feminism which was quite radical in character. Radical feminism one needs to understand represents a branch of feminism. In its extreme stance they advocate a society without men, which is impracticable.  But lipstick feminism also emerged as a challenge to feminist stereotypes and to change set notions about feminisms.

One thing which needs to be comprehended is that lipstick feminism is not something, on which we cannot draw generalizations.  Basically lipstick feminists believe that sexuality is empowering and if they enhance or utilize their sexuality in an explicit manner to pursue things they desire there is nothing wrong with it.  One has to agree that, there is absolutely nothing wrong with regarding one’s sexuality as empowering. That can be said for one and all beginning from men, women, to the LGBT community. One needs to feel good, free and confident about one’s sexuality. So there is nothing possibly wrong with that. Any rational analysis would reveal that infact, dissatisfaction about one’s sexuality is unhealthy and not normal. Hence it is only normal for women to be explicitly happy about their sexual being. So, being positive about sexuality is in no way contradicting to feminist values or orientations and hence the branch of lipstick feminism.

For instance one could take Lady Gaga or Madonna as stylish women who stand for women empowerment and girl power in a predominantly patriarchal world.

There are some conventionally imposed notions which we need to get beyond ourselves. History substantiates that women and men have always been stereotyped as typical characters and have been associated with distinct traits like coyness, passivity and submissiveness for the former and brave, strong and upfront for the latter. But once again the question is, why this stereo-typing? If a man has been courting a countless number of ladies he is a stud but if a woman is seen with multiple partners then she is a slut. If we call ourselves a rational and unprejudiced people we should hold unbiased opinion for both sexes irrespective of the gender orientations. Again if a woman chooses to express herself sexually society regards it as taboo or indecent behaviour; but again we do have the practice of clandestine sexual fulfillment which people avail by paying money.  There are women involved in that practice also. So once again the question, why the double standards?

This is what the lipstick feminists seek to undo. They wish to do away with the covert expression of sexuality.

Tina Richardson, a self professed feminist, had made a statement that the two are not contradictory. She said ‘Feminism should empower a woman to feel as though she can embrace her desires, whatever they may be, and give her the strength to fulfill them.’ So the basic idea is there is nothing wrong with sporting lipstick and stilettos and still being a feminist !

Feminism is not all about fighting for the womenfolk and their rights, it is about being a woman, it is the celebration of womanhood itself. In a society where a perfectly toned body and figure zero are highly endorsed lipstick feminists dare to differ. They opine that women ought to love themselves the way they are, curvy, fat or skinny! It’s all about loving one’s physical self just the darn way you are!  That is the kind of life the lipstick feminists endorse, a life where the womenfolk are not intimidated by patriarchal inhibitions and can be themselves without any intimidation. So may be lipstick or stiletto feminism is a sex positive feminism, but the point is, there is no explicit irony in the combination of the two — lipstick and feminism. So why the hell not should the women stand up for it…!

Just let me die ! – Tishta Tandon
One Bullet Is All That It Takes..!! – Arjun Choudary

SABRINA IQBAL SIRCAR is a Research Scholar in the Dept of Political Science, Gauhati University. Her E-mail - iqbal.sabrina@gmail.com