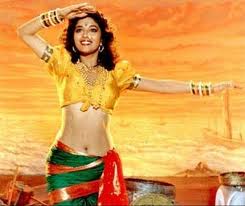 Bollywood dance numbers are a different entity in itself; influenced from both classical and western with strong influences of folk dances sometimes. Its a beautiful amalgamation of all the forms by the choreographers along with superb support from costumes, sets, light and music- well mostly -well choreographed. Why shouldn’t it be? After all we have had some great dancers too and what better way to let them display their skills then by making it beautiful for them?. So let me just not prolong the intro and get into the listing mode.

First at the top of my list is – Humko Aaj kal from the movie -Sailab. Dancer- The great Madhuri Dixit. Can there be an equal to her in terms of dancing when she was in her prime during the nineties? and even now I hardly find any parallel to her. The grace! the poise!- nimble! lithe! seductive!-Every thing just as Madam Dixit would say – Purrrfect!

So I was in real dilemma on which one from her illustrious numbers do I list. Will it be her raw sexiness of Khalnayak? or the energy of Tezaab?the mischief of Channe ke khet mein of Anjaam or the graceful Devdaas. But finally I picked this song from Sailaab as the dance comes as a surprise in the narrative seemingly because Madhuri is a Doctor in this movie. Ok Ok . I know this shoudn’t be a criteria but this is not the only criteria. I mean just have a look at her expressions, the rhythm in her body; sensuous without being vulgar  . It is based on a folk song( I think Maharashtrian)The pace is slow but emphasis of every movement is present in each beat.! yes the top is this.

Second on my list is this Shilpa Shetty number from the movie Shool- Mein ayi hu UP Bihar lootne. Shilpa- a good dancer herself, moves well and has a great body to boot.Period. But of all her famous and not so famous numbers I like this one the best for its raw energy and the impishness personified Shilpa Shetty; raunchy-it is; but never crude or vulgar.The movements are Graceful even when the tempo is fast. Its  based on a folk one again.maybe Tamasha am not sure but Shilpa truly sizzles in this number.

Ah! Que Sera Sera . No! not the Doris Day number. But the duet of Prabhu Deva and Madhuri from the movie Pukaar. Yes , a very well choreographed number. Fast and precise coordinated movements, with none of the two missing a beat or energy . Lots of balance and a complete audio visual treat, as it has been artistically shot and over all an enjoyable experience. Of course the expressions are never amiss during the number and both Prabhu Deva and Madhuri looks completely at ease with the highly technical choreography. This number definitely comes in my list and is slotted at the third.

Aishwarya Rai- The beautiful Aishwarya Rai …  with due apologies to whom it may concern, but I have never developed a strong liking for her. The reasons being that I find her too plastic. I hope you get my point. But in this number I have to admit that she is all alive with mischief, love and joy. She is graceful as ever even when she pirouettes around like a pixy and sets the screen on fire with her magic. The steps are tough and the pace is fast, but the movements aren’t jerky nor out of place and the expressions just right and timed beautifully

Well spot number 5- Will it be Urmila Matondkar with her chamma chamma? But it is too fast and a bit too forceful. I do like it but… Rangeela musical number is also another good one too but not that great. There is the Lajja number which is decent. Decent in the sense, that it is executed well but again it wont make it to my list nor will the Kambakht Ishq number which is quite “modern and popular” to say but still- only good. So Madam Matondkar though I like you I still think Sri Devi should be in my list. She has been more in the limelight for her acting prowess. Who can forget her in Sadma?  But she is a great dancer too inspite of some Hawa Hawaiis and the likes. You just have to see her Jaag Utha Insaan for her moves. But in her more famous movies ;there is Chandni with some good dance numbers and Lamhe with her folk numbers ,the Snake Dance number from the movie Nagina which almost set a trend. So the fifth spot to Nagina- Just for Sri Devi the diva’s sake.

But now some will certainly put up this point about why haven’t I included the numbers of yore after all most of them were brilliant. Yes they were so and hence I am specially mentioning them. The numbers were mostly based on classical dance forms and you have to watch the songs to actually the believe the grandeur of the sets, the choreography and the perfect execution of the numbers. Like:

Vaijanti Mala! You might not like her acting because of over dramatic facial expressions but Gosh! she danced like possessed in movies like Amrapali, Jewel Thief etc. especially Amrapalli where she looks the part as a court dancer . Beautiful! Here I am inserting the Jewel Thief number for its somewhat contemporary feel which is again an example of great choreography.

Meena Kumari – Known for her histrionics was excessively graceful and had a remarkably expressive face without the need of emphasised expressions. She was divine in Pakeezah. So graceful to the point of looking extremely seductive. One flick of her finger, the raising of an eyebrow. Each subtle movement spoke volumes.

Waheeda Rehman- Extremely beautiful. A perfectly chiseled face- Did you know she was a great dancer too? Don’t believe? Watch Guide then. Especially there is a Kapilla number. And you have to watch it to believe how good she is in that one.

Another great Dancer and actress.Rekha. I would just recommend one movie to you- Umrao Jaan- that is enough . No words are needed.

And Finally..I am not sure if you have heard of Sandhya! Just watch Navrang and Jhanak Jhanak Payal Baje. She is a classical dancer but what is so special in her numbers are- experimentation ; tough moves; and radical choreography.

Through the lens- Steps ahead