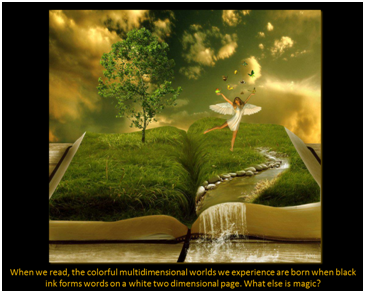 You can read the first part here

Words have the capacity to paint vivid pictures in your mind. In the hands of a master, the words can be made to convey a lot more than they mean. They can create a mood of poignancy or nostalgia. They can create the exquisite anticipation of the moment before the sun breaks over the horizon and makes good his promise.

To demonstrate what words can do, here is a passage from my favourite writer,Ayn Rand quoted from her magnum opus- Atlas Shrugged:

“Nothing. Tell me about the motor.”

She told him about her meeting with Dr.Stadler. She got up and paced the room, while speaking; she could not lie still, she always felt a surge of hope and of eagerness for action when she dealt with the subject of the motor.

The first thing he noticed were the lights of the city beyond the window: he felt as if they were being turned on, one by one, forming the great skyline he loved; he felt it, even though he knew that the lights had been there all the time. Then he understood that the thing which was returning was within him: the shape coming back drop by drop was his love for the city. Then he knew that it had come back because he was looking at the city past the taut, slender figure of a woman whose head was lifted eagerly as at a sight of distance, whose steps were a restless substitute for flight. He was looking at her as at a stranger, he was barely aware that she was a woman, but the sight was flowing into a feeling the words for which were: This is the world and the core of it, this is what made the city—they go together, the angular shapes of the buildings and the angular lines of a face stripped of everything but purpose—the rising steps of steel and the steps of a being intent upon his goal—this is what they had been, all the men who had lived to invent the lights, the steel, the furnaces, the motors— they were the world, they, not the men who crouched in dark corners, half-begging, half-threatening, boastfully displaying their open sores as their only claim on life and virtue—so long as he knew that there existed one man with the bright courage of a new thought, could he give up the world to those others?—so long as he could find a single sight to give him a life-restoring shot of admiration, could he believe that the world belonged to the sores, the moans and the guns?—the men who invented motors did exist, he would never doubt their reality, it was his vision of them that had made the contrast-unbearable, so that even the loathing was the tribute of his loyalty to them and to that world which was theirs- and his.

I experience a range of emotions when I read this passage. I become the proverbial fly on the wall as the drama unfolds. I see the slumped shoulders of a man who is disillusioned and dejected and is on the verge of ‘giving up’ as he speaks the first line. I see the quick concern of the woman as she leans forward to ask the man why he is despondent. The man, loath to  Ireach the place where I feel faint warmth of hope under a blanket of despondency in the third line. I can actually see the slumped shoulders of a man helpless and disillusioned by the maladies of the world. Gradually, as the conversation proceeds, you see the man raising his head, then sitting up straight, then squaring his shoulders. Finally, he matches the woman… as restlessly joyous as she is… as full of eager hope as she is.

This range of emotions could also have been communicated flatly. Ms Rand could have written thus:

Hank was absolutely dejected. He had no idea how he was to cope with the world. He didn’t even want to cope with it. There was no point.

For her sake, he forced himself to show an interest he did not feel. He asked her about the motor.

She told him about Dr Stradler. She began walking up and down because she couldn’t sit still when she spoke of the motor. As she spoke, he caught her excitement. Slowly, hope returned to him. He decided that he could not give up on the world as long as there remained a single man or woman of purpose in it.

Hardly the same, is it? While conveying almost the same essentials, the two passages were as different as the ocean and a bucket of water. Mind you, it has nothing to do with the length of the second passage. It could have been expanded with some more inane words rambling all over the place. They would still have missed the opportunity to add color and depth to the reading experience.

Without language our life experience would lack the richness brought to it by imagination. Our world view would be limited to the range of our direct perception. Even if we managed to delve deeper, without language how will that experience be shared? Being the social creatures we are, how are such experiences to be validated if they couldn’t be shared? Without validation, will the experience be real?

If you were following the thought I was trying to portray in the paragraph above, you would have experienced a sense of cloistered dismay. You would have felt as if your voice had been silenced forever… as if you were sealed in a container and thrown to the bottom of a still, limpid lake… never to be heard from again.

If there were no words, I wouldn’t have been able to make you feel that way. Your experience would have been limited to your physical world. There can’t be anything duller than that, surely?

We take language for granted. We have steeped it in acrimony and conflict. We have buried some and have elevated some. Yet it is language that has brought us out of the level of pre-historic man. You only have to look at the status quo of the animal kingdom to realize that. Destiny, of an individual or of all mankind, rests of our ability to communicate to each other how we perceive the world around us.

It is enough to be make me feel very grateful for the luxury of language.