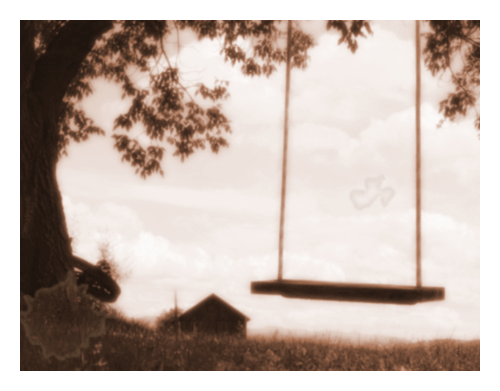 There was a rope swing on a tree.

The swing was a pretty rudimentary affair- just like the simpler times which forms the story’s backdrop. Two parallel loops of ordinary, thick, jute rope tied on a thick limb of the tree. A rough wooden plank jammed between the loops, bridging them. Four grooves cut into the plank to lock the rope in. That was the swing. Simple, no frills.

The loops were nearly twenty feet long. When the child sat on the swing, her toes barely touched the ground.

The tree was over sixty years old. It was berry tree… green berries… like jujube. The leaves were a mottled, deep green amongst which thorns nestled. The leaves had white undersides and strongly marked veins. The bark of the tree was deeply ridged. It had the color and appearance of sunbaked, parched land. There were always colonies of huge black ants marching up and down its ridges.

The limb on which the swing was tied was one of the low branches. The child didn’t realize it then, as children don’t, that the tree was huge. It had a foliage span wide enough for four elephants to stand under it comfortably. She was sure about the elephant part of it because she had seen four of them standing under it one day. The picture stayed in her mind.

There was a perfectly flat rock right under the tree. The child could sit on it with her feet tucked up and her back leaning against the trunk- lost in a book. The big black ants crawled over her at times. She’d brush them away distractedly. Years later she wondered why the ants had never bitten her. Perhaps they understood her solitary life, with no siblings and hardly any friends. They must have known she found colorful friends for herself in the world Enid Blyton created with the help of black words printed on a cream colored page. They must have been happy for her. Happy enough to let her lose herself in that world and not distract her.

When she’d begin to feel cramped, she’d climb up on the tree and sit on one of the branches, legs stretched out in from of her, back against the trunk. Or she’d go and sit on the swing, legs dangling, swinging gently while trying to hold the book open with two small hands. Once in a while she’d look up into the tree and watch the sunshine skidding off the surface of the leaves. She’d smile at the cacophony the crows made, or the way the bulbuls and parrots quibbled amongst themselves for the berries.

Many times she’d lie down on the flat rock, legs leaning up on the trunk, her head dangling over the edge of the rock, looking… just LOOKING… into the tree above. Or she’d lay down on the plank of the swing, just her lower back resting on the swing, head and feet hanging down turning her little body into an inverted arc. If she got bored with that, she would turn on the stomach and invert the arc. Holding the long ends of her two black ribbon plaits in her hand like the brush of an artist, she would draw endless dreams on the soft dust under the swing.

She had not been well for a few days and hadn’t been allowed to hang around the swing. After two days, she couldn’t bear it. Racing around to the tree, feverish, sweaty clutching the inevitable book, she stopped short, her jaw falling in amazement.

There were two children on the swing. The boy was standing behind the girl, who was sitting. They were both older than her. They were swinging so high the girl’s feet touched the leaves of the tree. The boy’s sturdy legs would bend down on the back swing as he pushed with all his might trying to take the swing higher. Already the arc they were describing was nearly 180 degrees. The little girl felt dizzy just looking at them. She stood there, hand jammed into her mouth in fright, expecting them to fall out of the swing any moment. She looked around, petrified, wondering who was compelling them to do this mad, mad thing. That they were being compelled was self- evident. Why else would anyone do something which might kill them any minute?

She didn’t find anyone with a gun in their hands. Before she began to feel sorry for the two kids, she noticed something very strange.

The kids actually looked as if they were enjoying themselves. They had the kind of wonder in their faces which in words would mean, “How on earth did we get so lucky?”

She had seen them before. They came from the slum at the back of the house. They must have sneaked into the garden to steal berries. Usually when they came, they would find her there and beg her to give them some. But she never did, of course. Her mom had told her not to let the ragamuffins inside the gates when she was all alone at home in the afternoons. She was an obedient girl and it had never occurred to her to disobey her mom, whom she worshipped.

Today, they must have found the garden deserted. She noticed a pile of berries in the corner. It must be the loot they were planning to take away with them. But the swing must have enticed them.

Intuitively, the child understood why the two on the swing were giggling soundlessly. They had to be silent, or they’d be discovered and thrown out.

Stealthily, the child withdrew. She went inside the house and tiptoed to the window overlooking the garden with the swing. There she sat mesmerized, watching the two kids having a time of their lives. She wondered what made them so happy. She couldn’t imagine how such a dangerous sport could produce joy instead of fear. She tried to imagine herself on the swing. Far from feeling a happy excitement, she felt her heart plunging into a pool of ice which had formed at the pit of her stomach. She felt like throwing up, she was so sick with fear.

The two outside continued their delighted game for a few minutes more. Then the boy let the swing slow down. They collected their loot and sneaked out of the garden, grinning with such pure joy that the child grinned too in her hidden corner.

She had no need for caution, now that the other two were gone. Yet she walked on tiptoe, as if afraid that she would shatter something delicate if she made a sound. Gingerly, she sat down on the swing. The plank was still warm. She tossed the book aside. She needed to be unencumbered.

With her heart pounding, she rocked a bit. She kicked with her foot and the swing increased its arc. She leaned back as she had seen the girl lean. To her surprise she found she could give impetus to the swing this way. The arc swung wider. She felt the wind rushing in her face, billowing her frock in her face. On the back swing, her hair at the back of her head floated around her neck and tickled her. She was thrilled to the core. When her mother came home in the evening, she could barely keep her secret to herself. But she did. She couldn’t wait until next day. She had decided to go all the way. The next day she would stand on the plank, push the swing as the boy had done and swing as high as those two kids had done.

She tried really. But it was scary standing on the wobbly plank. She always felt as if her feet would slip and she would fall. After a week, she gave up. A month later she had decided to block the memory of that failed attempt. She would sit and take her swing reasonably high. She was happy, but the image of the other two kids swinging high enough to touch the leaves wouldn’t fade. She brooded a little sometimes. She still didn’t know how those two had conquered their fear.

A few weeks later, she saw her parents upset. She knew it had something to do with her dad’s job. They talked about a court case. She didn’t really pay attention, nor did they try to explain anything to her. She thought they had sued her dad’s company for unfair practices which her dad had uncovered. In retaliation, his company had suspended her dad from the job.

Over the weeks while the trial went on, her parents left her more and more alone. She didn’t mind… she was accustomed to solitude, preferred it even. Then one day, her mother came home early, unexpectedly. She had got into an argument with her boss about the on- going court case. Naturally, she had stood up for what her husband had done. The long and short of it was, she got mad and quit her job. Now, there would be no salary coming in.

The sat on the rock, mother and child, waiting for her father to come home from the court. The child sat quietly beside her mother, holding her hand. Once in a while her mother sniffled.

Suddenly the mother stood up. She had a strange look on her face. She stepped up to the swing and clambered up… standing on the plank… bare feet planted firmly on it. Gripping the ropes firmly, she began to swing.

The child was shocked. She hadn’t known her mother knew how to do this. Somehow it was a child thing, the swing. Higher and higher the mother swung. The arc increased. The wind whooshed each time she swung past, making the child’s frock billow madly. The swing trembled with intensity. The arc it was describing was dizzying to watch. The child saw the plank touch the leaves above. She couldn’t believe her mother could be so utterly mad.

Her mother was not smiling with her lips. She was smiling inside. It shone out of her eyes like a luminous fire. Barely a moment later, the child’s father entered the garden. He stood there quietly, watching his wife on the swing. The moment she saw him, she let the swing slow down. While it was still swinging, though it had slowed down, she hopped lightly off it and went over to her husband. They stood looking at each other silently.

“They won’t defeat us”, she declared fiercely. “They wont”, he echoed. She put her head on his chest and sobbed. He held her, letting the worry drain out of her on his shirt front.

The child understood then. Taking risks, sticking your neck out, doing what nobody dares to do, going where no one has been before- dangerous, daring, passionate things- make people feel alive. It gives people a sense of worthiness, of accomplishment, of having made a mark on the world. A bit of swagger, a load of self- respect, a big helping of pride and a dash of recklessness go into making that feeling.

It is also the best known antidote to fear.

The Last Wish – By Anindita Paul

The Joker and The Crystal Maiden – by Lightroom Poets